The Lure of the Sea, And Its Distance From Courts 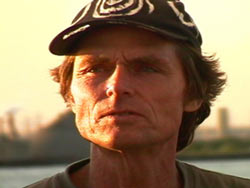 Open water can be a good way to test one's mettle, but is equally as good for running from one's problems. Reid Stowe is about a third of the way through his epic thousand day journey on the open seas without making landfall. Stowe is continuing on his epic voyage, while back at home the courts await his return so he can pay up on unpaid child support.

New York's Dept. of State issued a warrant for Reid in 2005 for nearly $12,000 in unpaid child support for his now-30-year-old daughter, a portion of which has been paid in the interim. He still has $10,000 in debt outstanding and landlubber law enforcement aren't forgetting about it. Per the Daily News:

"We want to collect the money and, if we can find him, we will try to do that," said Michael Hayes of New York's Office of Temporary and Disability Assistance, which manages child support collections.

"We can seize his property, and that could include his boat. Boat seizures have happened in the past. If it belongs to him, we have the authority."

It's not Stowe's first brush with the law. He served some time in a federal penitentiary in the early 1990s after he was caught smuggling 15 tons of marijuana aboard his boat. That would drive any man to seek the wide open expanses of the sea.

He had a crew mate, 24-year-old girlfriend Soanya Ahmad, but she had to bail out the other week after suffering persistent seasickness.
Photo of Reid Stowe from Current TV

#1000 days at sea
#child support
#reid stowe
#soanya ahmad
#warrant
Do you know the scoop? Comment below or Send us a Tip