In September 2009, Harlem resident Glenn Wright, 21, was murdered at the Baruch Houses on the Lower East Side in what investigators say was a mistaken-identity gang slaying. Wright, who had no involvement in gangs, stepped outside to take a break from washing his grandmother's windows when a group of men approached him. Prosecutors say the gang was looking for revenge for an earlier assault, and his alleged killer, Joel Herrera, 20, told detectives he confused Wright with someone who beat up one of his friends. Wright died after being stabbed in the back of the neck.

Wright's untimely and tragic murder sparked an outpouring of grief across the city and, as his family tells us in this interview, even as far as the west coast. Several hundred mourners attended a memorial for Wright, who was remembered for his generosity and his creativity, and particularly his involvement in an after-school robotics team that went to the national finals. His alleged killer is now finally on trial, and yesterday we spoke with Wright's sister, Karina Rodriguez, and his brother Peter Wright about the trial and their devastating loss.

Words can't really articulate this, but I just wanted to let you know that our readers really responded with a lot of sorrow to the news of Glenn's murder, and I just wanted to personally convey my sympathy.

Karina: Thank you so much. We appreciate that you all are helping us make people aware of what happened and dealing with the court case and everything; and the media attention really helped in terms of making sure the DA and detectives stayed on the case. We appreciate you all for helping us get the kind of attention it needed.

It seemed to me that Glenn's death really struck a nerve—several hundred people turned out for his memorial. Why do you think his death sparked such an outpouring of grief?

Karina: One of the things is that the kind of person that Glenn was, the kind of kid that he was. He was a really shy, reserved, intelligent kid. And he was good to everyone he knew. And he had so many things he wanted to do in his life and he had so many things that he had already done. He was delving into politics, working with Community Board members, and trying to help Inez Dickens get reelected. So he started volunteering with her office and working for their election campaign. He wanted to get more involved in politics, and of course he was on the robotics team and that's where he really came out of his shell, because he found something that he really loved and it gave him a voice.

And then he had his photography and his art, and there were times where just, if nothing else, Glenn and his friends were just skateboarder, rocker, hippie, kind of geeks, and just the sweetest, sweetest, sweetest kids ever. And they were just all very close. They did a lot of creative things together and they inspired each other and it was just tragic for that to happen. It would have been tragic if it had happened to the person that they intended to go after. That shouldn't happen to anyone! But the fact that it happened to someone who was innocent and so promising and had achieved so much and had so much more that he was gonna be able to do...

They just snatched away the potential of a wonderful person, a wonderful leader, and not just from our family but the community as well, because Glenn was very involved in the community. So I don't think there is anyone who would hear this story and then look at the background of this kid and not have it tug at their heartstrings. During the time following his death, people were reaching out to us from across the country all the way to the west coast. Complete strangers. Because it was just that deeply tragic and hurtful, that this young promising guy had his life stolen away from him.

Peter: I agree. I think that for the community, he represented a different side of the story that we usually don't see a lot of times—when they focus on young black men in the mainstream media, it's negative. They're either in gangs or going to jail for some reason, and he represented that there are alternatives to that and there are young people who are doing positive things, with great promise.

Glenn was mentoring the robotics students, is that correct?

Peter: He was mentoring with the East Harlem tutorial program and also with the POINT in the Bronx, which is another non-profit community arts service organization.

Karina: Glenn was part of Harlem's first robotics team, and he actually led the team to the Nationals in Atlanta. And after that he came back the next year as one of the volunteers and mentors for the next group of kids that were gonna be on the team. So yes, he was still mentoring the team. He was no longer on the team, he was a team mentor.

And he did not reside in the Baruch Houses?

Karina: That's correct.
Peter: No, yeah, he was in East Harlem.
Karina: He's never lived there. 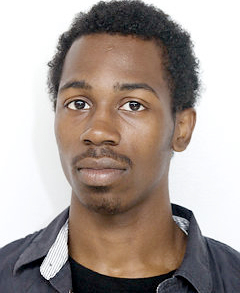 Glenn Wright
Could you talk about what he was doing there that day, and the events that led up to the murder?

Peter: Well, he made it a habit to go down and visit our father and our grandmother and our family down there, so it was something that he would do pretty much every weekend. It was routine for him, and he went down there to visit them. We had plans later that evening; I had hired him as a photographer for an event for a client of mine, so we were supposed to meet up later that evening to do that. He was down there washing the windows for my grandmother, doing something that just represents his giving and lovable nature.

The investigators believe that the person who was accused of killing him was looking for someone else, is that right?

Karina: Yes, that was one thing that was almost immediately established, even before the first 24 hours of this happening. We had already started hearing from the detectives that this was a possible case of mistaken identity, and as they continued forward with the investigation it became evident and clear that that's exactly what happened. And the gentleman that they actually were intending to destroy, he lives in Baruch Houses. He actually lives in the same building, maybe even on the same floor as Glenn's grandmother. So they were even able to pinpoint exactly who the intended target was.

Has the young man who is on trial now, Joel Herrera, expressed any remorse?

Karina: Not at all. In fact it's such a hard thing to do, to sit in the courtroom and see him there. He's smiling, giggling; you know, winking at whoever the people are that are sitting there that know him. And at one point he made eye contact with me and it was just the most gruesome stare he gave me, and it was just, nothing there, it was just a cold stare. And I couldn't believe it. I couldn't believe that there was nothing in his eyes.

And we're all sitting there, you know, our eyes are puffy, and we're crying and all this is going on, and he actually turned around and for, like, maybe 5 seconds just stared at me, just blank and cold and heartless. I couldn't believe that there was nothing, no kind of remorse in his eyes. Every time they bring him in and out of the courtroom and he's got smirks and smiles. He's just seems cocky, really. That's what it is.

What would you say, if you could say something to him, what message would you give him?

Karina: Boy, that would take a lot more time than he'd probably have. I have a lot of words for him and I'm hoping that I have the opportunity to read a statement to him because there is a lot I want to tell him. I want to tell him what he did to our youngest brother, Isa, who has Down syndrome. Isa does not communicate or comprehend very well. He's limited in that regard, and so we're not able to really explain to him what happened to Glenn.

All Isa knows is that Glenn is no longer here. And it hurts me because I always feel... You get the sense that Isa thinks that Glenn just left him and just kind of disappeared. And he carries a picture of Glenn in his pocket and every once in a while will go places or do things and he'll just start calling out to Glenn. So obviously he's looking for Glenn. He doesn't know what's going on well enough to understand that Glenn is not coming back, but you can tell he is still looking for Glenn; he's trying to figure out what happened to Glenn.

Peter: I think the only thing that could at all possibly help this situation would be if he turned his life around and became someone who spoke out against gang violence, and someone who did, at the end, show remorse and was able to steer away those kids who are on that same path that he's on. I think that would be the only kind of justice for Glenn because Glenn was such a compassionate person and he was all about the community. That that's the only way that I could make any peace with anything to do with Joel.

Do you feel the NYPD and the Manhattan DA's office have done everything they can to try to bring justice?

One of the things I was glad that I was finally able to do was speak to the surgeon, who testified on Friday. I was able to speak to him outside of the courtroom and I told him that for years I just always wanted to be able to... I didn't know that he was going to be testifying, but I've always wanted to be able to let them know, on behalf of the family, that we know how hard they worked to save our brother and we believe that they did everything they could... It was just unfortunately, it was just not possible. But I needed to be able to let him know that, because I saw how emotional it was for them when we were there at the hospital working on Glenn.

They were doing their job, but they were also very emotional and having their moments of breaking down, and you don't normally see that when it's someone's profession—you are kind of are desensitized. But whatever it is, whatever it was, they did not seem like they were just doing a job. They were deeply, deeply invested in the process, and it was emotional and it was hard for them.

And I was able to let him know that we appreciated everything that they did. And we hugged, we embraced, and he even broke down then in front of me outside the courtroom. I couldn't believe it, that this doctor, you know, this is what he does every day, and for him to still have these emotions, it just really says a lot about how unfortunate what happened to Glenn really is. Because people who didn't even know him can't seem to come to terms with how tragically he was taken out of this world.

#baruch houses
#glenn wright
#Justice
#Lower East Side
#murder
#trial
Do you know the scoop? Comment below or Send us a Tip