The LES: from Dangerous to Endangered 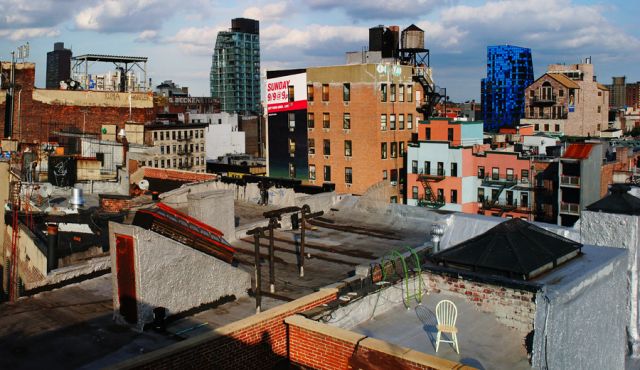 Photo of Looking Northeast from a Roof on Broome Street by Jake Dobkin; McHattan billboard via chinese_fashion's flickr.

Last year the National Trust For Historic Preservation named the Brooklyn Waterfront one of the 11 Most Endangered Places, and this year some of New York's land gets the honor. The Lower East Side has made the annual endangered list, which highlights the country's areas deemed at risk of irreparable damage. 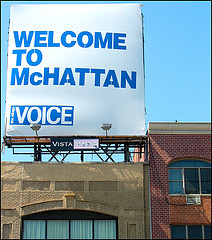 Thanks to new development, the "social and physical fabric" of the neighborhood is eroding. From the press release/obituary:

New hotels and condominium towers are being erected across the area, looming large over the original tenement streetscape. As this building trend shows no sign of abating, it threatens to erode the fabric of the community and wipe away the collective memory of generations of immigrant families.

Although the Lower East Side was placed on the National and State Registers of Historic Places in 2000, such a designation functions primarily as an “honor roll” and does not preserve a neighborhood’s appearance or regulate real estate speculation.

From the raising of the Blue Condos to the loss of the First Roumanian Synagogue, the rise and fall of neighborhood structures is in overdrive; "in 2007, permits were approved for the full demolition of 11 buildings on the Lower East Side, compared with just one in 2006."

The LES is turning into a gateway to McHattan (the Village Voice even states as much on a billboard that looms above the 'nabe), but who will defend its honor and grasp onto the old charm that places like Libation have destroyed? Two years ago the Lower East Side Preservation Coalition formed to protect the neighborhood and its history; president Richard Moe warned: “The Lower East Side is truly an irreplaceable area that speaks to one of the most powerful narratives in American history. Should the streetscape be radically altered by out-of-scale development, we will forever lose the neighborhood’s cultural context as well as its dynamic spirit.”

The full list of the nation's latest endangered places, after the jump...

The 2008 list of America's 11 Most Endangered Historic Places (in alphabetical order):

California’s State Parks - California’s state park system, the largest park system in the U.S., encompasses a vast array of historic and cultural resources that chronicle the state’s rich and storied heritage. It also has suffered greatly from years of chronic underfunding and has $1.2 billion in deferred maintenance. Proposed budget cuts, which would have led to the closure of 48 state parks, have been staved off. The underlying problem remains. Current funds only cover 40% of actual maintenance and operations needs, which means irreplaceable historic and cultural resources remain endangered.

Great Falls Portage, Great Falls, Mont. – This National Historic Landmark, one of the best preserved landscapes along the Lewis and Clark Trail, is slated to get a massive coal-fired power plant in its front yard. Development abutting the Great Falls Portage, an undeveloped rural area under panoramic blue Montana skies, will irreparably harm the cultural and visual landscape.

Hangar One, Moffett Field, Santa Clara County, Calif. – The hangar, a local icon built in 1932 to house U.S. Navy dirigibles, is a cavernous, 200 foot tall dome-shaped structure covering more than 8 acres of land. A 2003 inspection revealed PCBs leaking from the hangar’s metallic exterior. Although the Navy transferred Hangar One to NASA in 1992, the Navy is responsible for environmental remediation, but has no mandate to replace the exterior and preserve the building.

The Lower East Side, New York City - The Lower East Side embodies the history of immigration, one of the central themes of American history in the nineteenth and early twentieth centuries, yet development threatens to erase the surviving historic structures. This includes houses of worship, historic theaters, schools and the tenement, a unique architectural type which, by the sheer numbers who lived in such a building, had an impact on more Americans than any other form of urban housing. A New York City landmark designation and contextual zone changes within the neighborhood would preserve the physical character of the neighborhood.

Michigan Avenue Streetwall, Chicago, Ill. - This 12-block stretch of historic buildings—dating back to the 1880s—is a virtual encyclopedia of the work of the city’s best architects, including Daniel Burnham and Louis Sullivan. Although this “streetwall” was designated a Chicago Landmark in 2002, its historic character is now being threatened by the inappropriate addition of large-scale towers that retain only small portions of the original buildings or their facades.

Peace Bridge Neighborhood, Buffalo, N.Y. - The neighborhood and the site, with homes and buildings dating to the 1850s on two National Register Olmsted parks, is an iconic section of the City of Buffalo. The Public Bridge Authority (PBA) proposes to expand Peace Bridge and include a 45 acre plaza that will eliminate over 100 homes and businesses (dozens of which are eligible to the National Register) and diminish the Olmsted parks. Suitable alternate sites exist, but PBA refuses to properly consider them.

The Statler Hilton Hotel, Dallas, Texas - When the Statler Hilton opened in downtown Dallas in 1956, it was hailed as the most modern hotel in the country. Today, the building sits vacant. Located on an increasingly attractive piece of real estate, the Statler Hilton faces an uncertain future as encroaching development pressure heightens the threat of demolition. Current regulations restrict alternate uses, so a sympathetic developer is needed to restore and reopen the Statler as a hotel.

Sumner Elementary School, Topeka, Kan. - The school, a National Historic Landmark, helped launch the nation’s Civil Rights Movement as the centerpiece of the U.S. Supreme Court’s ruling in Brown v. Board of Education. Currently vacant, the school suffers from deferred maintenance and has sustained significant damage from water infiltration and vandalism. Though the city of Topeka owns the school and is required to maintain and protect it, the City Council has authorized its demolition. A sympathetic developer is needed to save and restore this icon.

#development
#endangered
#LES
#Lower East Side
#Lower East Side Preservation Coalition
#McHattan
#National and State Registers of Historic Places
Do you know the scoop? Comment below or Send us a Tip