The Knicks Have A New Coach- Now What? 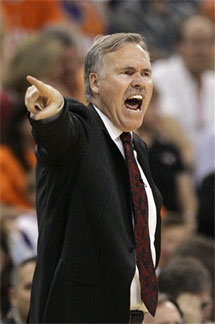 According to reports, Mike D’Antoni has agreed to become the next coach of the Knicks. D’Antoni will receive a four-year/$24-million deal to move from Phoenix where he led the Suns to 50+ wins in every full season he coached.

The Knicks, who haven’t had a winning season since 2000-01, will presumably install D’Antoni’s high-octane offense and attempt to run like Phoenix has the past few years. The problem is, the Knicks don’t have the players to fit that system. (Does Eddy Curry even know how to run?) On the plus side, D’Antoni’s teams have never been known for defense, which makes him a perfect fit in New York.

While D’Antoni is clearly an upgrade over Isiah the success or failure of this hiring will rest on the players he is given to coach. Remember, it was just three years ago that Larry Brown came to town with an even better resume and we all know how that ended.

Donnie Walsh has his coach, but now he needs to revamp the roster and that is going to be much harder to do than using big bucks to hire a coach. And on Thursday, the Post spoke to one Knicks player familiar with D'Antoni's style: Stephon Marbury said, "I have no problem with Mike D'Antoni. I never had a problem with Mike D'Antoni. The way I'm training my body this summer, I'll be fit to do anything. We played up and down and there's a lot of pick and rolls. If we take D'Antoni for coach, that's great."

#Donnie Walsh
#knicks
#mike d'antoni
#new york knicks
#sports
Do you know the scoop? Comment below or Send us a Tip