'The Job Is Dead': NYPD Officers Seethe In Wake Of Pantaleo Firing

by Jake Offenhartz and George Joseph

When Police Commissioner James O'Neill announced the firing of Daniel Pantaleo, the officer who fatally choked Eric Garner in Staten Island more than five years ago, the city's top cop made clear that he expected backlash. "Had I been in Officer Pantaleo's situation I may have made similar mistakes," O'Neill said on Monday. "If I was still a cop, I'd probably be mad at me."

Indeed, many cops are quite mad. The leadership of the city's three top police unions, which together represent roughly 35,000 active duty officers, seem to be treating the news as an unprecedented betrayal. Police Benevolent Association President Pat Lynch has spent recent days pushing for a work slowdown, touring through precincts to inform officers that the Patrol Guide is now meaningless and that "no one has our backs."

Brooklyn South Trustee Anthony Cacioppo and Citywide Trustee Thomas Hellem stopped by the @NYPD71Pct to spread the word that we are on our own, no one has our backs, and do to everything possible to avoid discipline and loss of job #NoConfidence #JobisDead pic.twitter.com/bSyTzZtdSJ

Many rank-and-file officers also said that Pantaleo, who a department judge found guilty earlier this month of placing Garner in an illegal chokehold, had been a convenient scapegoat for police brass.

"They believe that Pantaleo was given a raw deal," a veteran Bronx patrol officer, who asked for anonymity, told Gothamist. "In essence it shouldn't just be Pantaleo getting fired, it should be the person who ordered them to make the arrest. The only reason Pantaleo went out there was because he was ordered to do so."

On Wednesday, the NYPD revealed that the sergeant who supervised Garner's arrest would avoid a disciplinary trial by pleading guilty to the charge of failure to supervise, with the punishment of losing 20 vacation days. The ten other officers involved in the arrest will not face discipline, according to the city, including Pantaleo's partner, Justin Damico, who initially claimed that Garner was trafficking enough cigarettes to be charged with a felony, and told investigators that force was not used in the arrest.

At a press conference this morning to discuss the sergeant's guilty plea, Sergeants Benevolent Association president Ed Mullins said, "The NYPD is falling apart at the seams."

On social media and other public forums, the city's rank-and-file officers have added their voices to the seething chorus of dissent. Some have changed their avatars to the inverted NYPD flag as symbol of distress, or to a photo indicating "I'm with Pantaleo."

Perhaps nowhere is the level of rage higher than Law Enforcement Rant, a popular message board for disgruntled NYPD officers. In hundreds of posts across multiple threads, the community has reacted to the news with nearly unanimous disgust.

"This shit is why I'm retiring in 7 months," wrote one commenter. "I hate knowing every day that [through] no fault of my own I could be that guy." 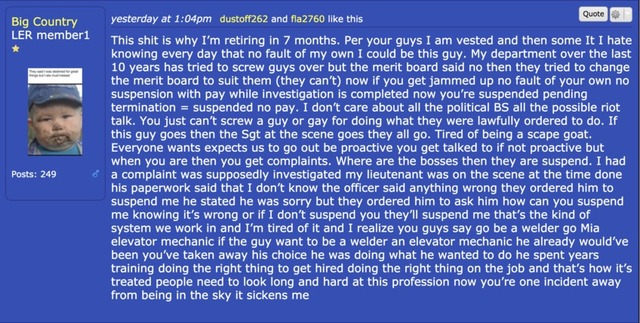 Members in the group have circulated wanted posters of O'Neill for "effectively killing the NYPD," accompanied by vague threats that he "better be prepared for the consequences." They describe Mayor Bill de Blasio as a "fucking communist who HATES COPS." The Garner family has been labeled "savages" and "ghetto dwellers." (Overt racism is an enduring feature of the long-running message board.)

Ranters have also traded tips for how to organize a proper slowdown, with an eye toward doing the most damage to the mayor and the commissioner. "If the average response time goes up by 3 minutes, city officials will shit themselves," wrote one member.

"Never saw a cop get jammed up for banging out paperwork. Job is dead," added another, echoing Lynch's declaration earlier this week.

Similar sentiments populated the since-disabled comments of Pantaleo's GoFundMe, which cracked $130,000 on Thursday. A review by Gothamist found more than 50 contributors who share names with active duty police officers.

Among them are Ryan Bonti, who accompanied his donation with the message, "Sad day when the department holds a perp higher than an officer"; Scott Hamburger: "The criminal element has won over society"; Taras Kolosiej: "P.O. Pantaleo was just doing his job. If there is a victim here, it is this officer"; Paul Bergen: "This was a political stunt by our CLOWN of a mayor. Palanteo needs to know his brothers and sisters support him"; and Matthew Velger: "All cops stand with Daniel Pantaleo!!!!"

The fundraiser was started by Richad Troise, a former officer with the NYPD's Emergency Services Unit. Neither Troise nor any of the individuals mentioned above responded to Gothamist's inquiries.

In a statement to Gothamist, Cynthia Conti-Cook, a staff attorney at the Legal Aid Society, said it was "disappointing but not surprising that some officers believe they are entitled to use unquestionable amounts of violence and that their actions should be beyond consequences."

Meanwhile, some officers will privately acknowledge that Pantaleo used a banned chokehold. One veteran officer even told Gothamist, on the condition of anonymity, that he agreed with the commissioner's decision. He also argued that fault for Garner's death primarily rested with the city's focus on Broken Windows policing, which he said pits beat cops against communities of color.

"As police officer I understand how they see it, but they're not seeing how the racist ways of the police department led them to this," the officer said. "Broken windows makes stuff like this happen against black people." Garner was initially stopped for allegedly selling loose cigarettes, a "quality-of-life" offense that the mayor has said should continue to be enforced.

The officer also suggested that Pantaleo's race may have factored into the outpouring of support he received from the department. He noted that such full-throated solidarity was largely absent after the department fired Peter Liang, an immigrant officer who fatally shot an unarmed black man in 2014. The officer speculated that "if a minority had [killed Garner], they would have fired him immediately."

#daniel pantaleo
#eric garner
#james o'neill
#mayor de blasio
#nypd
#original
Do you know the scoop? Comment below or Send us a Tip