In just a few days, the first of four planned phases of the Second Avenue Subway will open, marking the first major expansion of the New York City Subway system in 50 years. We wrote about the long history of the star-crossed infrastructure project last week. Now let's dig into more details about the completed project.

Fits And Starts
A Second Avenue Subway that would connect East Harlem down to the tip of Manhattan was first proposed in the late 1920s, but there was never actually any work done. The idea stuck around though, and in 1972, when Nelson Rockefeller was governor and John Lindsay mayor, ground was first broken on the project.

From NYT coverage of the groundbreaking:

The Mayor, after noting that the idea for the subway was conceived in the nineteen twenties, said, "We know that whatever is said about this project in the years to come, certainly no one can say that the city acted rashly or without due deliberation."

Several stations were built, but budget concerns ground it to a halt and the project was ultimately abandoned.

In the late 1990s, the idea of the SAS was revived again. Various proposals were put forth, including a "stub line" that would run from 125th Street down to 63rd Street and Lexington, and then onto the existing N/R line to lower Manhattan and Brooklyn. The issue even came up in a 2000 senatorial debate between Hillary Clinton and Rick Lazio. By the early 2000s, a clearer plan to build a full SAS line emerged—imagined as a multi-phase project. In 2004, the MTA pitched a plan for Phase 1 of the project calling for an extension of the Q train from its current terminus at 57th Street over to 63rd Street and Lex and then up to 96th and Second. At that point, the expected completion of Phase 1 was slated for 2011.

Construction was originally planned to start at the end of 2004, but the date came and went with nary a shovel in sight. Many said the project was dead, undone by financial problems at the MTA, as well as budget cuts from then-governor George Pataki. But, somehow, it survived. In April of 2007, with yet-to-be-disgraced Governor Eliot Spitzer (but not Mayor Bloomberg) in attendance, ground was again broken. 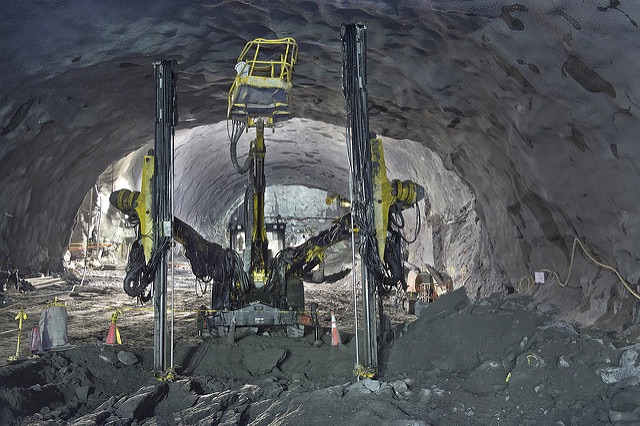 All About The Benjamins
While costs crept up from an original budget estimate of $3.8 billion, the project picked up steam with an infusion of federal money. Of course, the deadline for Phase 1 kept moving—2011, 2013, 2015, and then, finally, 2016.

Sadly, over the course of construction, the MTA scrapped some fancy features, including glass platform walls with sliding doors that would have increased energy efficiency and prevented people from throwing trash on the tracks (or jumping onto them).

Ultimately, Phase 1 is coming in around $4.5 billion—$700 million more than originally budgeted. Phase 2, which would extend the line up to 125th Street near the Harlem River, is expected to cost $6 billion. Tunneling for that will begin in 2019 or 2020. The MTA hasn't yet offered clear price estimates for Phases 3 and 4, which go down to Houston Street, and then to Hanover Square in the Financial District. A total price tag of $17 billion has been tossed around for the entire SAS, but Phase 3 and 4 are too distant, and the potential costs perhaps too scary, to really know. 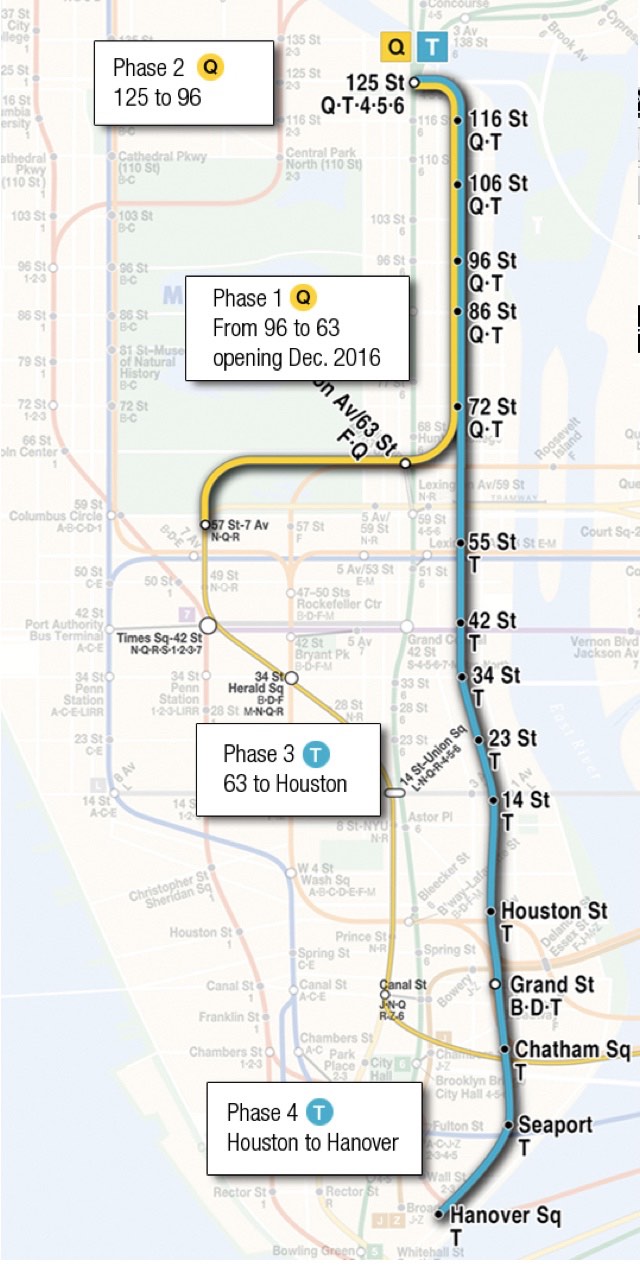 To put the $4.5 billion cost of Phase 1 in context, when the Second Avenue Subway was first proposed in the late 1920s, the estimated price tag of the entire project, which would have gone to Houston Street (the destination of the MTA's Phase 3), works out to about $2.4 billion in 2016 dollars. That's approximately what one mile of Phase 1 cost. On the other hand, the $700 million overrun seems reasonable in the context of major infrastructure projects, which have been known to go terribly wrong.

Meanwhile, the promise of convenience has pushed up rents along Second Avenue. Over the past half decade, median rents along the thoroughfare are up 27 percent—twice the increase along Third Avenue and around a third more than along First.

If You Build It
Phase 1 adds three entirely new stations to the subway system, at 72nd, 86th, 96th—all along Second Avenue. The existing 63rd Street-Lexington Avenue Station, where the F runs, was also renovated so the new-and-improved Q train can stop there. There will be a cross-platform transfer between the Q and the F.

Two tunnels, one northbound and one southbound, were dug for Phase 1. Drilling of the northbound (west) tunnel—which is 1.47-miles- or 7,789-feet-long—took approximately eight months. It was completed in February 2011. The southbound (east) tunnel, which at 1.36 miles, or 7,209 feet, is slightly shorter, was completed in September 2011. All told, the cost of the project works out to approximately $300,000 per foot tunneled.

They Will Come
The MTA expects 200,000 people to use the Phase 1 line on an average weekday. For context, that's more than half as many daily riders as the entire Los Angeles Metro system (350,000). So as expensive as the new project is, it's a major improvement for the system. And compared to the monstrous Santiago Calatrava dino skeleton PATH Station, which cost $4 billion dollars and is serving around 50,000 riders a day, we could call it a steal. 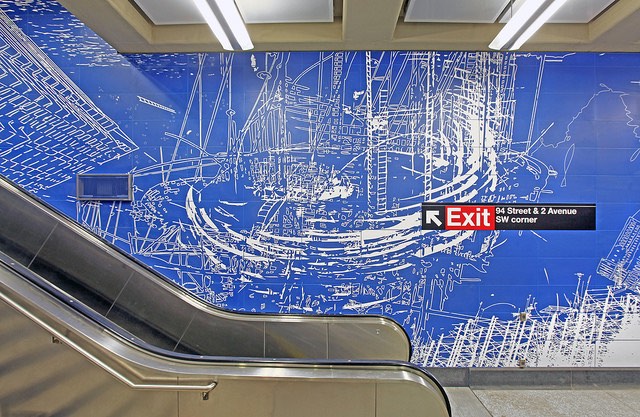 Sarah Sze’s "Blueprint for a Landscape" at the 96th Street station. (MTA / Flickr)

What's Next
If the entire SAS is built, it will feature a total of 15 new stations spread out over 8.5 miles. The line, which will ultimately get its own letter (T) and color (turquoise), would be the shortest complete line in the system. (We're stuck with the Q until phase 3; the "T" only arrives when the line extends south to Houston.) Hopefully, we'll see a complete line in our lifetime.

#2nd avenue subway
#explainers
#faq
#MTA
#subway
#subway facts
#original
Do you know the scoop? Comment below or Send us a Tip