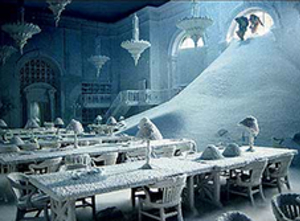 From the Day After Tomorrow

The Ice Storm is coming! And not the kind that involves key parties. The ice hasn't even hit the ground yet and it's already canceled 1,300 flights from New York City's three major airports, according to FoxNY. The National Weather Service is forecasting a mixture of snow, sleet and freezing rain, and they've got us under an ice storm warning until tomorrow at 6 p.m. Driving is not recommended during this time, and forecasters warn that ice accumulations could knock down some tree limbs and power lines, which could affect mass transit... or worse.

The above image isn't from The Day After Tomorrow, it's from NOAA and shows the massive winter storm affecting a large portion of the country—stretching from new Mexico and the Southern Plains northeastward through the Midwest and into the upper Mid-Atlantic and New England. But if things do get all Day After Tomorrow out there, be sure to send us your photos (or tag them "Gothamist" on Flickr!)... especially if the New York Public Library starts to look like this picture on the right.

#ICE
#ice storm
#sleet
#snow
#weather
Do you know the scoop? Comment below or Send us a Tip