The I-Man Cometh Back 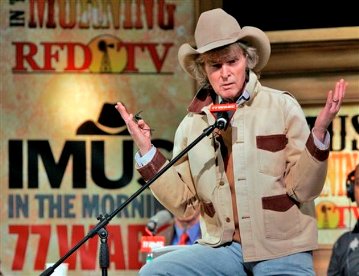 Don Imus made his return to the airwaves this morning, with a mostly zinger-less show -- spending the first half hour discussing the comment that got him fired. The NY Times reports that after 8-months of off-air time, Imus came back with a vow that he "will never say anything in my lifetime that will make any of these young women at Rutgers regret or feel foolish that they accepted my apology and forgave me.”

To keep him in line, he's got two new sidekicks, both black and one female. Karith Foster and Tony Powell are both comedians on hand to keep open “an ongoing discussion about race relations in this country.” (It's unclear whether Hispanic and/or Asian sidekicks will be added as the show progresses.)

In a Barbara Walters special airing this Thursday, she asked the shock jock whether the new cast members were added out of guilt, to which Imus replied, "No, I thought it was an opportunity to diversify the cast." And reacting to the incident's repercussions, he said "people don't want to have this conversation about race relations, so, out of this idiotic thing that I said, a lot of good can come, because I'll have a huge audience and an enormously influential audience."

Karl Frisch, spokesman for Media Matters (the site that first posted Imus' Rutgers comments online) made the following statement: “Don Imus has an opportunity to show the American people that he has learned from his experience -- that the bigoted insults he once leveled on a regular basis have no place on the public’s airwaves and do nothing to raise the level of discourse in this country. We will continue monitoring his broadcasts as we have done for years.”

Will the world respond to a kinder, gentler, more humbled Imus? And more importantly, is it for real?