Learning about the horrors of war is fine for some children in other countries, like when somebody has to explain why a kid's entire family was just blown up in a drone strike. But it is NOT OKAY for American children to learn about all the wars their parents' taxes finance abroad. At least that's the moral of today's NY Post "exclusive," which insinuates that "city and state education bureaucrats" are going to traumatize third graders by recommending illustrated books like The Librarian of Basra, which shows airplanes dropping bombs on Basra. You remember Basra, right? We liberated it from Saddam Hussein a decade ago and

The book is a true story based on the experiences of a librarian in Basra who saved 30,000 volumes from the library when the U.S. and allies began bombing the country. (Four days after moving the books, the library burned to the ground.) But will 8-year-olds even be able to function after being exposed to illustrations of airplanes dropping bombs? (See below—parental guidance advised!) As Americans, we work so hard to shield our children from violent imagery, and then along comes a bunch of bureaucrats to shatter their pristine innocence. 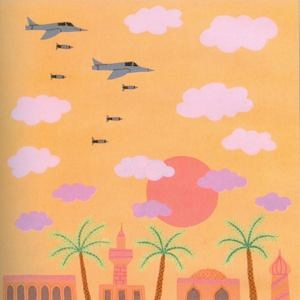 An illustration from "The Librarian of Basra"

Another suggested book is Nasreen's Secret School: A True Story from Afghanistan. Ruh-roh a TRUE story from Afghanistan?! Put your ear-muffs on kids, this could get informative! The illustrated story, by the same author as The Librarian of Basra, is about one little Afghan girl's experiences when the repressive Taliban takes over in the late '90s. Certainly the last thing we want is a bunch of nosy kids getting curious about the Taliban!

“There’s no way in hell that I find it appropriate for third grade, let alone elementary school, on so many levels,” a Queens elementary-school principal tells the Post. "We don’t have to bring the message of war with it. We don’t have to bring in guns and bombs. My assumption is that some person would have read the material and gone over it and approved it, but I don’t know in what world they could have been living.” Obviously some sort of nightmare Bizarro World where children are taught about other children who go to bed mat-on-the-dirt at night not knowing if President Obama is going to bomb them during the night.

The whole manufactured tabloid controversy reminds us of something Louis CK said during the last season of his show Louie. Telling the audience that he'd heard parents wondering when it was appropriate to tell their children about America's never-ending wars, CK pointed out, "In other countries, they don’t have a choice. In Afghanistan, they found out when they ask 'How come Uncle Harry' head is gone now?' 'Oh, ’cause the war.' "

#americans
#innocence
#tabloids
#war
Do you know the scoop? Comment below or Send us a Tip