The High Line Is Struggling With "Aggressive" Fake Monks

Following a now-familiar pattern—business interest group responds to aggressive solicitation complaints magnified by tabloids at major NYC tourist destination—Friends of the High Line has launched a campaign to curtail panhandlers dressed as Buddhist monks along their 1.5 mile elevated park.

"Friends of the High Line is aware that there are aggressive panhandlers in the park, many of whom are dressed as monks, and we take this issue very seriously," the group wrote in a press release published this week. "While panhandling itself is legal in New York City—and therefore legal along the High Line—it crosses the line when our trusting park visitors are touched or their paths are blocked."

So-called "aggressive solicitation," which includes obstruction of pedestrian flow and intimidation tactics like touching or following an individual, is illegal in NYC. 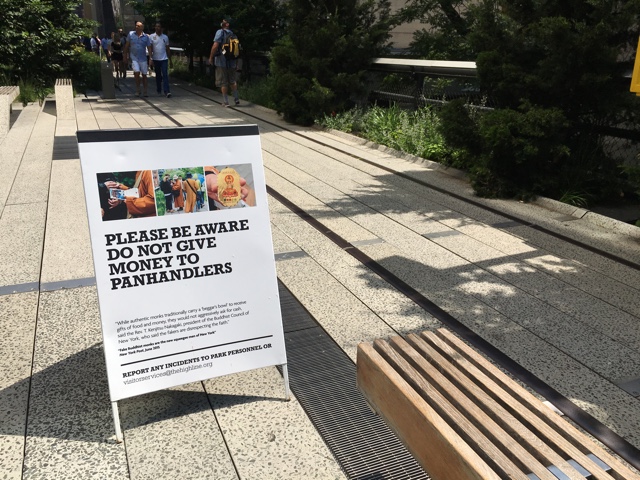 To address the issue, Friends has put up signs asking parkgoers to "please be aware" and "do not give money to panhandlers." On Friday morning, we observed two signs between Gansevoort and 30th Street, at 23rd Street and the entrance to the Whitney Museum. The group is also collecting reports of aggressive behavior from parkgoers to send along to the Parks Department and, according to their release, "working behind the scenes to see what long-term legal options we may have." (The Parks Department said in a statement that it is monitoring the situation and "supports the messaging efforts.")

All told it's a step up from tactics used in years past, which were limited to paper signs in High Line elevators and bathrooms.

Tip-soliciting monks have been a source of some confusion at NYC tourist destinations for years now. In 2014 the NY Times, stymied, went so far as to print that "no one seems to know who they really are or where they come from." But their approach seems to be consistent—man (or, occasionally, woman) in orange (sometimes brown) robe asks for donations for a temple, sometimes in exchange for peace offerings in the form of a shiny amulet or beaded bracelet.

Spokespeople for local Buddhist organizations have also weighed in. "They're not authentic," Michelle Dunson, of the Buddhist Council of New York City told CBS. "They're not real. They're playing on people's heart strings. It's basically a scam like any other." Shi Ruifa, a Brooklyn monk and president of a confederation of local temples, told the NY Times bluntly that, "they are damaging the reputation of real monks and damaging the reputation of Buddhists in America."

Friends of the High Line says the panhandling situation has recently devolved significantly, citing a CBS dispatch headlined Hassling By Fake Buddhist Monks On High Line Has Grown Worse, Vendors Say. According to the outlet, "nearly a dozen" were observed asking for donations of $2, $5, or $10 on a recent afternoon.

Friends Co-Founder Robert Hammond says that he's been approached by fake monks "dozens of times," many of whom touch his hand. "It's illegal and if it happens to anybody they should notify a parks officer," he said. "But not all of them do that."

Last November the Post published a video of two undercover cops taking a fake monk to the ground and arresting him, allegedly for reaching into one of their pockets. Hammond said that nothing "that extreme" has happened on the High Line, to his knowledge (according to Friends, two monks were arrested for aggressive panhandling near the High Line last summer). 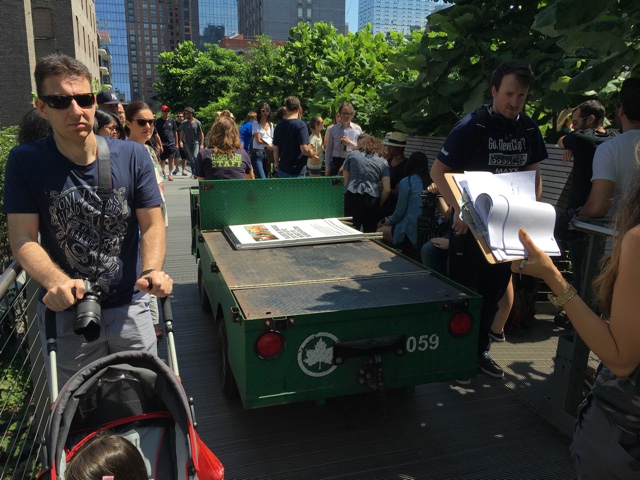 Mike L., who asked that his last name be withheld because he told his boss that he was sick today and then headed over to the High Line, told us on Friday that he visits the park every few months and is familiar with the monks.

"This is the first time I've seen the signs, but I remember seeing the monks last summer," he said. "I was sitting here with my girlfriend and a guy came up with a little gold thing, gave it to me, and then said it was $5, so we gave it back."

"My girlfriend said maybe he was a real monk, but I was iffy," Mike added. "It's shitty that they give real monks a bad name."

This week's signage campaign launched within days of the NYPD's enforcement of mandatory activity zones for costumed characters in Times Square, and the City Council's passage of wide-ranging regulations for ticket sellers near downtown ferry terminals, including steep fines and jail time for aggressive solicitation.

"We hope we don't have to go to that point," Hammond said. "But we're trying this out and we're going to see how it works."

Anecdotally, the signs seem to be having some impact. We walked the length of the High Line from Gansevoort to 30th for an hour Friday, and didn't see a single monk (granted, it was a weekday morning). A Reddit thread contains similar observations. Mike Acosta, visiting from Woodbridge, New Jersey, said he saw one monk this morning, exiting the A/C/E at 8th Avenue. "He didn't talk to us but he talked to a few people," Acosta said.

Earlier this week, fake monks worked their hustle on the Times Square pedestrian plazas, apparently disregarding the green painted boxes where all ticket sellers and tip-solicitors are now technically required to stand. One reporter observed that the NYPD didn't seem to mind.

#aggressive solicitation
#fake monks
#high line
#Monks
#panhandling
#quality of life
#original
Do you know the scoop? Comment below or Send us a Tip
A new Gothamist is coming! We’ve moved comments over to our beta site. Click here to join the conversation and get a preview of our new website.