"The Gun Took My Mommy": Police Offer $12,000 For Shooter Who Killed Brooklyn Woman, Injured 3 Others 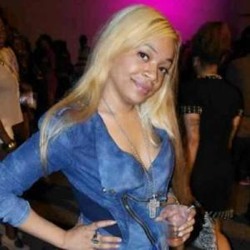 The Thursday night fatal shooting of a 28-year-old Brooklyn woman on Clarkson Avenue in the Flatbush (or Prospect Lefferts Garden) neighborhood has left a neighborhood frustrated and a four-year-old boy very confused. Fatima Gordon had been walking home from the store with family members, including her son Chinnarie, when a shooter fired. Gordon was shot in the back, and her mother told the little boy to crawl to her, "Keep looking at grandma."

Gordon was pronounced dead at Kings County Hospital and relatives told the Post that Chinnarie said, "Where is Mommy? The gun took my mommy." The boy suffers from diabetes and had to be admitted to the hospital last night, because his blood sugar spiked (apparently Gordon was the only one who knew how to give him his insulin).

The police believe the shooting, which occurred around 9 p.m. outside of 40 Clarkson Avenue, was committed by a man riding a bicycle who opened fire on the crowd. Three other people, including a 13-year-old boy, were wounded. The police also plastered the area with posters, asking for the public's help in identifying the shooter (there's a combined $12,000 reward for the arrest and indictment/conviction of the perp), with surveillance video images of the bike-riding gunman.

Residents told the Times that violence has been a given lately, with one saying, "There’s been a shooting or a stabbing on this block every other night for the last two weeks. I’ve stopped going outside at night. If I need something from the store, I just wait until the morning." And the sister of the 13-year-old victim told the Wall Street Journal, who had been walking with him at the time, "Something needs to be done. You can't even walk out to the store and know if you'll be returning back home."