The Guggenheim and MoMA Fight For Picassos 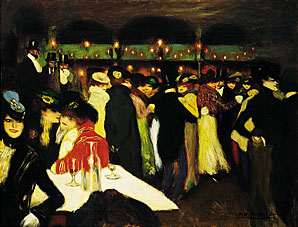 The AP reports on two Picasso paintings that have hung in the MoMA and Guggenheim for decades, and the fight to keep them there. Julius H. Schoeps claims they are the property of his great uncle who was persecuted in Nazi Germany, and has demanded the museums hand over the paintings, "Boy Leading a Horse" (MoMA) and "Le Moulin de la Galette" (Guggenheim). The suit was filed at the District Court in Manhattan.

Both museums are asking that the court declare them the rightful owners, after doing extensive research into the history of each piece and feeling confident that "Mr. Schoeps has no basis for his claim." The history that they've recorded goes like this:

Before his death, Mendelssohn-Bartholdy engaged in a series of maneuvers that Schoeps said were intended to protect his estate and an incredible art collection. Besides the Picassos, it included nine paintings by Vincent van Gogh.

The family sold the two paintings at issue in the lawsuit to the Jewish art dealer Justin Thannhauser in 1934 or 1935. Thannhauser fled Germany and spent much of the war in Switzerland. He kept "Le Moulin de la Galette" until 1963, when he gave it to the Guggenheim museum. He sold "Boy Leading a Horse" to former MoMA chairman William Paley in 1936. Paley gave it to MoMA in 1964, according to the museum's Web site.

Glenn D. Lowry, director at MoMA, told The NY Times, “The provenance chain is complete. We have done an enormous amount of research, which confirmed what we already knew: There is absolutely no evidence that these paintings were sold under duress.” In other Picasso-related lawsuits Schoeps has argued that "his great-uncle parted with the paintings only because he expected his estate to be plundered by the Nazis. He consigned five Picassos, in all, to Thannhauser." Things are looking up for the museums, however, as none of his past attempts to gain ownership have panned out.