The Flag in Grand Central Terminal 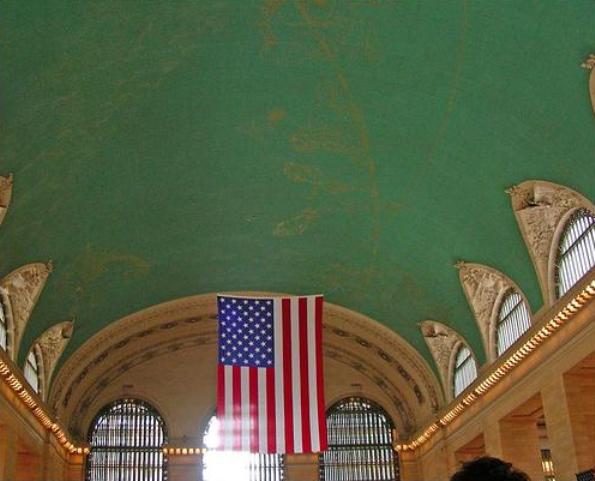 There's a thought-provoking essay in the Observer suggesting it's time to take down the huge American flag in the heart of the terminal. The flag was placed in Grand Central soon after September 11, 2001, and MTA Metro-North spokeswoman says the flag's "nearly four stories tall" size is "basically unprecedented." (There is also a smaller, standard sized flag in the hall.)

John Lumea explains how icons work in public spaces and how public spaces are experienced. Then add to that the public's poor perception of the war. He writes:

What makes Grand Central exceptional is that it’s the one place anywhere in New York where you can stand right in the middle of the most careening rush of human ambition and diversity, yet be completely alone in your reverie. This is the urban embodiment of the American idea of welcome and possibility, and it’s what makes Grand Central’s main hall a great American room.

Icons must be seen to be felt. For its entire history, Grand Central has had two icons: the great gilded, four-faced clock below and the sky ceiling—one of the glories of New York—above. And yet, today, our view of the Grand Central sky is forcibly distracted, mediated, and blocked by a competing icon: a four-story-tall American flag.

The flag always is a contested symbol, since it stands both for general national ideals and specific national policies being carried out in the name of those ideals.

For those who see President Bush’s war policy as an expression of national ideals, Grand Central’s flags “hold together”—they are true.

But for the solid and increasing majority who oppose the war, national ideals are especially hard to decipher in the Grand Central flags, which lord over the main hall as corporatized, Orwellian symbols of state power and pride.

Lumea suggests instead, "Take the current flags down and plant a single flagpole in the floor of Grand Central’s main hall. Make it tall. Raise a simple flag to half-mast, and leave it there until every last combat veteran in Iraq is either redeployed or comes home."

It's a fascinating thing to think more about. Lumea will be publishing a longer version of his essay at his site, Horizonr.

And other prominent flags in NYC's recent history are the one on the building across from Ground Zero and the one outside the New York Stock Exchange (thanks, readers).

Update: Lumea wrote to us, "As far as I can tell, there is only one other clearly documented case of an extremely large American flag being hung at Grand Central -- and I can't help but think that the comparison is telling. In late 1957, shortly after the successful Soviet launch of Sputnik 1, the U.S. Army's Redstone nuclear missile was briefly displayed in Grand Central's main hall as part of a promotional campaign to calm America's cold-war nerves. A flag comparable to the largest flag now at Grand Central was used as a backdrop."