A big chunk of the FDR Drive on the Upper East Side will be shut down in both directions off-and-on during overnight hours for the next month.

According to the Department of Transportation, workers are taking over the roadway for two large scale projects—the East 91st Street Marine Transfer Station, which will eventually collect waste from four Manhattan districts, and a new two story, three-block-long Rockefeller University building, the steel pieces of which are being dropped into place from massive crane barges on the East River and assembled over the FDR.

The first major drop took place early this morning, of a structural steel piece weighing in at about 1.53 million pounds. Here's a rendering/clarification of why it's probably a good idea to clear the lanes: 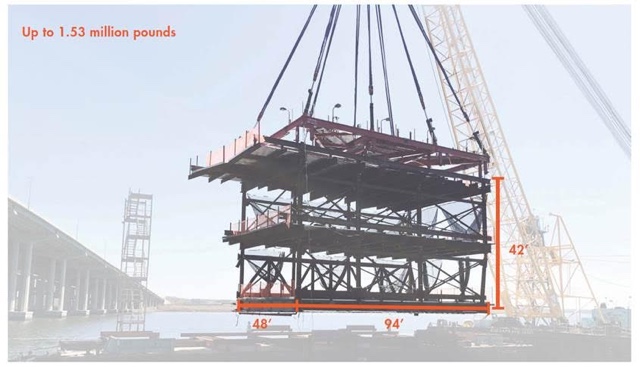 Traffic expert Sam Schwartz, a.k.a. Gridlock Sam, has been keeping a close eye on both projects, and issued a warning to NYC drivers this week, urging everyone with wheels to avoid First and Second Avenues, 42nd-96th Streets, and York Avenue from 59th-96th Streets during closures.

"The FDR Drive is the only continuous highway through Manhattan," he stated. "Its closures will be felt regionally, so try to stay on the Brooklyn-Queens side as long as possible or the Henry Hudson/West Side Highway combo."

There's plenty more full-closure action scheduled for this week, in both directions from 61st to 96th Streets. The FDR will be best avoided starting around 10:00 p.m. leading up to these scheduled work hours:

And here are the lovely detours:

Southbound traffic will exit at 96th Street, and use Second Avenue to 42nd Street to reenter the FDR drive.

Northbound traffic will exit at 61st Street, be directed to First Avenue, and follow detour signs to 96th Street to re-enter the FDR drive.

During the closures the northbound entrance ramps at 34th, 42nd, and 62nd Streets will be closed.

The southbound FDR Drive 34th Street exit will be closed.

Before the closures go in one to two lanes will be closed between 11 p.m. and midnight.

Similar goodies are in store through July 19th, with weekly closure updates expected from the DOT. Unless, the city warns, inclement weather slows everything down.

#FDR
#gridlock
#Gridlock Sam
#sad
#street closures
Do you know the scoop? Comment below or Send us a Tip