The FBI Is Investigating De Blasio's Fundraising, Too

The FBI is looking into Mayor Bill de Blasio's fundraising practices as part of its wide-ranging investigation into two prominent businessmen who are backers of his, as well as top NYPD officials, some of whom were demoted on Thursday as word of their involvement leaked. For de Blasio, the probe's focus seems to be how the mayor hit up real estate bigwigs for money during his campaign, and particularly the role of his former campaign treasurer Ross Offinger, according to reports.

The businessmen, Upper West Side developer Jona Rechnitz and Borough Park, Brooklyn consultant Jeremy Reichberg, served on de Blasio's inaugural advisory committee. Reichberg hosted a gathering in de Blasio's honor at his home to raise money for the mayor's controversial slush fund, Campaign for One New York, and Rechnitz donated $50,000 to the organization, as well as $9,900 directly to de Blasio's campaign, between him and his wife. Rechnitz is also said to have bundled $40,000 in contributions from others for de Blasio, and donated more than $100,000 to elect Democrats to the state Senate at de Blasio's request.

Offinger was also once treasurer of Campaign for One New York, which de Blasio is now disbanding after sustained outcry from good-government advocates who argued he was using it to circumvent campaign finance laws, and owed donors big favors as a result of their unrestrained spending.

"We are fully confident that the campaign has conducted itself legally and appropriately at all times," de Blasio's campaign spokesman Dan Levitan said.

Uptown and Bronx state Sen. Adriano Espaillat told the New York Post he will return $14,000 in contributions from Rechnitz.

Meanwhile, a third mover and shaker implicated in the probe has been indicted for an alleged $12 million Ponzi scheme. Hamlet Peralta, the former owner of the Hudson River Cafe in Harlem, was arrested in Macon, Georgia on Thursday on charges that he took bundles of money from investors for a wholesale liquor business he said he was running. The problem: the business didn't exist, and he allegedly used the money to pay off personal debts. 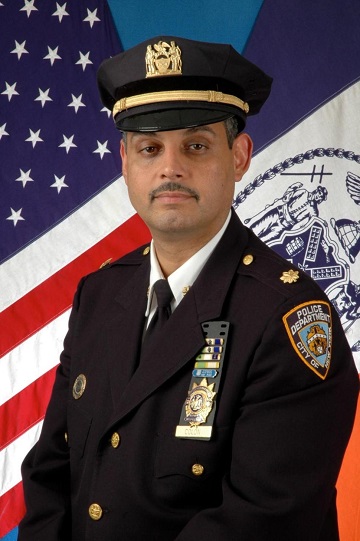 The U.S. Attorney's Office for the Southern District of New York said that starting in July 2013, Peralta promised investors big returns from the liquor business, but misappropriated the money to repay other investors or spend himself, using just $700,000 on liquor. He allegedly promised one investor four percent interest on his investments from profits on a fictitious business that he said had a contract with a restaurant supply company. That investor purportedly put $3.5 million into the project, and in the process of putting off paying dividends, Peralta allegedly fabricated a letter from the restaurant company showing a $1.8 million payment was imminent. It wasn't.

Peralta is charged with wire fraud and could face as many as 20 years in prison.

While he was running the Harlem cafe, it served as a clubhouse of sorts for high-ranking police officers, including those demoted when their names surfaced in connection with the investigation.

A number of police parties were held at the Hudson River Cafe and Deputy Chief [David] Colon had a relationship with Peralta, sources said.

Several years ago, Colon was trying to create his own organization called “hispanic executives reaching out,” and held at least one party at the Hudson River Cafe, with police executives and some police officers in attendance.

In July 2014, Peralta was arrested for punching a man in the face inside an apartment on East 51st Street. Peralta allegedly hit the victim so hard that he lost hearing to his left ear and suffered cuts to his face.

Former Chief of Department Philip Banks III, also under federal investigation, frequented the eatery as well, along with a pal, Inspector Ruel R. Stephenson, former head of the 30th Precinct. Stephenson has not been named as a target of any probe.

Banks left the department in 2014, possibly because of the federal investigation. Demoted alongside Colon was Deputy Chief Michael Harrington, Banks's onetime underling and until recently commander of Manhattan North, who also reportedly frequented Peralta's restaurant. Citing an unnamed rank-and-file cop, the Daily News reported that Peralta's popularity among NYPD brass meant the establishment got special treatment.

The officer suspected that Peralta’s cop connections — particularly with Deputy Chief David Colon — were behind a policy to go easy on enforcing quality of life violations like noise complaints, drinking in public and music playing past 4 a.m. [...] The cop said the rank and file also suspected someone was tipping off Peralta about upcoming surprise inspections of the restaurant by the NYPD, FDNY, and State Liquor Authority. On one Friday night visit, the restaurant was suspiciously empty and everything appeared to be in perfect order, the cop said.

Grant was demoted from commanding officer of the 19th Precinct to working a desk in the medical division, while Harrington went from executive officer of the Brooklyn Housing Division to a desk job in Transit. Rodriguez was demoted as executive officer in Brooklyn South to handling fleet repairs and logging property confiscated during arrests, while Colon has gone from being commander of Brooklyn Housing to working in courts on such things as prisoner transfers.

The four are among around 20 high-ranking officers questioned by the FBI about Rechnitz and Reichberg's purported gifts of international vacations, cash, and diamonds, and possible favors granted in return, including security details for weddings, funerals, and business deliveries.

Speaking to reporters at a New York Press Association function upstate, U.S. Attorney and Albany dragon-killer Preet Bharara said, "As I’ve said before, the business of our public-corruption unit is corruption, and right now business is a-boomin'."