The EV Gets ET 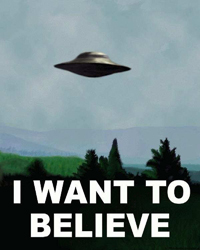 The East Village is hosting a three-day "Culture of Contact" festival at the Two Boots Cinema on East 3rd St. this week, featuring UFO buffs, a number of films, talks, and music, all with aliens as their subject matter. According to the article in the free commuter daily Metro, incontrovertible proof of an alien crash landing at Roswell, New Mexico has surfaced. Event organizer Jeremy Vaeini was spurred to call together fellow UFO followers after a personal experience with aliens.

“In October 2001, I woke up with a spectacular, diffuse white light outside my window,” he said. “To my right appeared three gray beings — and I know this sounds crazy — they were wearing tunics.”

That's hard to dispute; it does sound crazy. The Culture of Contact festival includes movies at Two Boots, artwork at P.S. 63, and music at Lit Lounge all weekend long. Tickets are available at the event's linked-to site.