The Divisive Crocheted Symbol Of Bushwick Gentrification Is Coming Down

Rob Abner, the owner of the Bushwick Flea, will remove artist London Kaye's controversial 15-foot yarn mural in time for this weekend's flea market, according to a Facebook post from yesterday evening.

Last Tuesday, Bushwick native Will Giron posted a picture on his Facebook wall of Brooklyn artist London Kaye installing the Wes Anderson/Stanley Kubrick mashup mural on the side of his family's building. Kaye did so with Abner's permission; the flea market sets up on a lot adjacent to the Giron family's home. Abner did not, however, ask permission of Giron's aunt, who owns the building, and has lived there since the 1960s.

In an e-mail to Giron on August 31st, Abner wrote, "Can we compromise and we will take it down at the end of October. I want to be good neighbors who help each not fight. I dont want this to escalate further."

Here is the flea market's Tuesday evening post in its entirety:

Shoppers coming to the market this weekend will notice a blank wall where London Kaye's awesome 15 foot high crochet mural used to be. It was on the side wall of the market space, but unfortunately that wall belongs to the adjacent building, and the owner's have told us to take it down. It's been a cause of controvery lately because we never asked permission to put it up. That was a mistake and we have apologized for not asking first.

However, what does taking the piece down accomplish? Many, many visitors to the market have enjoyed the piece. Many, many people have posed for pictures in front of it. It was a source of enjoyment, but someone made it a source of controversy and divisiveness, and now it will be gone.

The immediate reaction from Facebook commenters was not particularly forgiving, although one commenter said “feel free to put it up on my building." 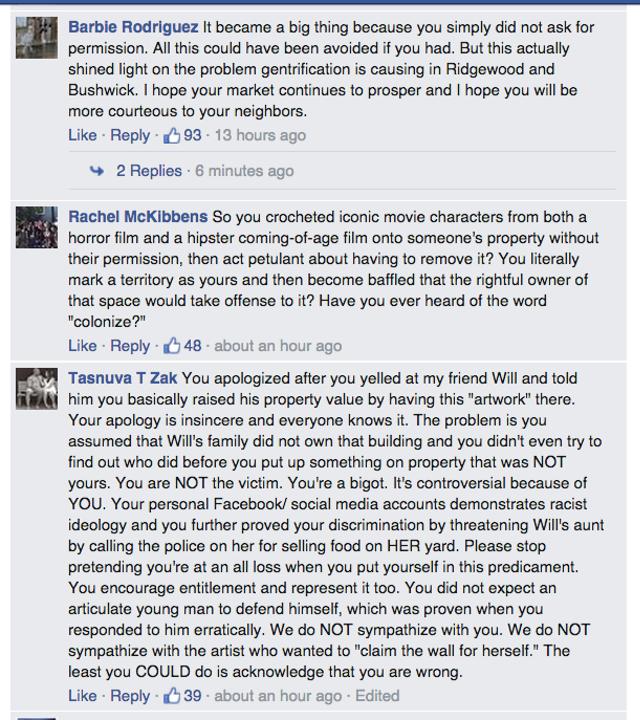 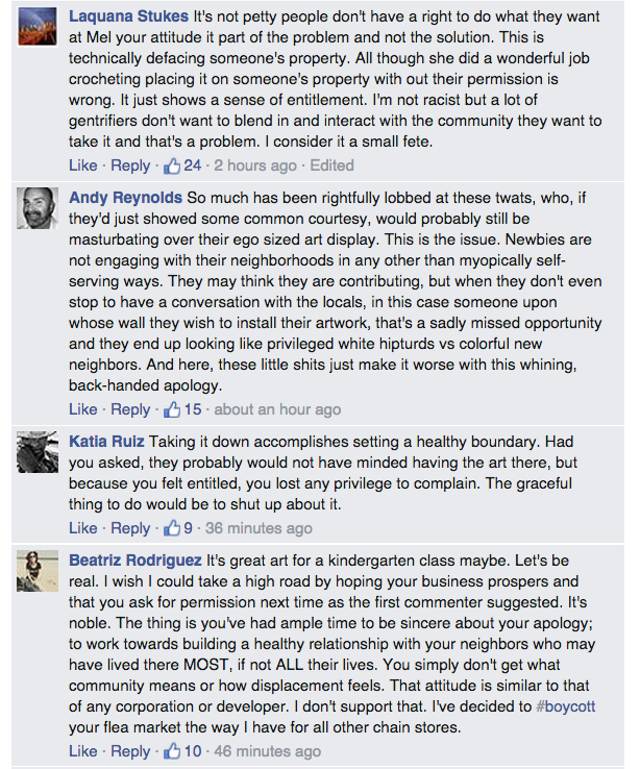 Giron recently told us that the mural had become a symbol of the gentrification of Bushwick. Therefore, he wouldn't push for its immediate removal.

"It's not about self victimization, Mr. Abner. It's about having respect for your neighbors and for the community," he wrote last night on Facebook, in response to the Flea's announcement. "Thank you once again to everyone who has stood by us. I hope we can continue to build and dialogue together."

#art
#bushwick
#Bushwick Flea
#colonizers
#gentrification
#graffiti
Do you know the scoop? Comment below or Send us a Tip