Like millions of other Americans, I was glued to my screen (in this case, a livestream online) to watch the Brett Kavanaugh hearings last fall. It seemed at the time to be a watershed moment in the country's public discourse about #MeToo and judicial temperament, about what kinds of stories and victims we choose to believe and which we push aside. I watched the proceedings with a growing knot in my stomach, one which bloomed into, as my colleague Claire Lampen put it, a frustrating feeling of near-nihilism over Kavanaugh's entitled rage, and over Christine Blasey Ford's treatment. I couldn't get any work done and I couldn't look away, even as the horrible reality of nothingness—nothing will really change on this day, nothing will stop the Kavanaughs of this world for now—set in. I vowed not to fall into this kind of sinkhole again, and I imagine many others felt similarly deflated.

So yesterday must have felt like deja vu for a lot of people besides myself. Donald Trump's longtime lawyer and personal fixer Michael Cohen testified on Wednesday before the House Oversight Committee and for the first time publicly accused the president of criminal conduct while in office.

Cynics and skeptics were quick to point out beforehand that this was going to be a big nothingburger: we already had heard most of these accusations because of reporting by the likes of the Washington Post & NY Times, we already knew Cohen has lied and contradicted himself on numerous occasions in Trump's defense, and moreover, Trump has been able to skate away from every big announcement and accusation—so why would that change now? As one commenter put it yesterday, "Can't wait for nothing to come of this either."

But as with the Kavanaugh hearings, there was an innate compulsion to bear witness to the livestream of history, even if it turned out to be yet another drop in an ocean of Trump scandals that seemed really important at the time, but later turned out to be just another thing in the news that day. This was undoubtedly a very different, though no less riveting, viewing experience than the Kavanaugh hearing. If the Kavanaugh hearing unfurled like a slow-paced horror movie (The murder weapon? Gaslighting), the Cohen hearing was like something out of a Coen Brothers film, one filled with hopelessly inept criminals, overly-sensitive politicians, surreal humor, and the kind of ominous foreshadowing that would seem gratuitously over-the-top if this were fiction. 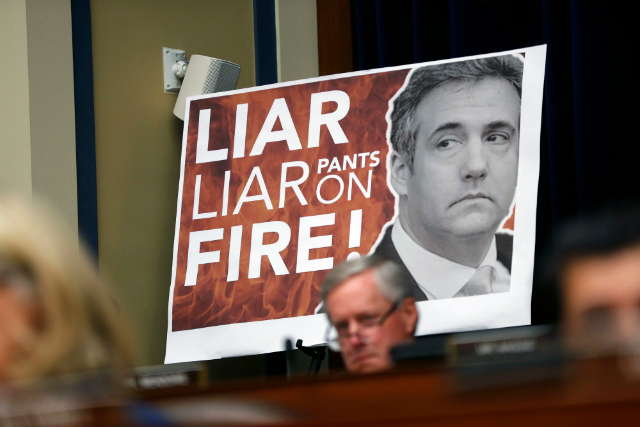 Less than twenty-four hours after the 6+ hour long session, the details all seem like a blur of unreal moments. Cohen's opening prepared remarks, which were disseminated to the press before they were delivered, were an overture of forceful, unguarded statements about Trump's contradictory, corrupt nature; his own complicity in Trump's criminality; and the durability and relevance of mafia lingo in 2019. If the Democrats were looking for slogans to use against Trump in 2020, they could just borrow a few phrases straight out of Cohen's mouth:

Donald Trump is a man who ran for office to make his brand great, not to make our country great. He had no desire or intention to lead this nation - only to market himself and to build his wealth and power. Mr. Trump would often say, this campaign was going to be the “greatest infomercial in political history.”

And the whole opening salvo was given an extra meta texture when Cohen literally looked into the camera, as if he were addressing TV junkie Trump directly:

OMG when he looks directly at the camera like he’s Ray Liotta breaking the fourth wall in GOODFELLAS pic.twitter.com/CA8M7DYRPj

Afterwards, the back-and-forth with lawmakers immediately turned into partisan volleyball. Democrats largely took turns grandstanding about ideals and speculating about Russian connections without actually pinning down anything of substance, wasting several opportunities for inquiry along the way. Committee Chairman Elijah Cummings did give a powerful closing statement about the importance of the hearing, and one other major exception to this: Alexandria Ocasio-Cortez, who asked some substantive and specific questions about taxes and insurance that established a "factual basis for further committee investigation."

Republicans—led by Rep. Jim Jordan—were united in their attempts to discredit Cohen as a liar who was always in it for the book deal. On Twitter, Rep. Matt Gaetz taunted Cohen with threats about his family, the GOP branded him a "star liar", and Don Jr. and Eric Trump threw hissy fits over Cohen's alleged job ambitions. There is no doubt that everyone was on the same page about the line of attack.

Often, what wasn't said by those politicians was far more telling than what was: there wasn't a single Republican who tried to defend the president on the substance of the accusations Cohen was making. "Truthfully, it is tough to ignore some of the gross immoral behavior by the president," one senior House Republican, who requested anonymity, confessed to the Washington Post. "The reason there was no defense is because there is no defense." It's especially rich considering that Republicans gleefully brought up again and again the fact Cohen is a convicted liar...but were incapable at engaging with the fact that Cohen's lies were often made in Trump's defense.

As Michael Cohen speaks, think about how remarkable it is: a man convicted of LYING to Congress is now appearing before Congress again... just weeks later. Invited by the Democrats as their star 'witness.'

And all the while, the left hails his every word as gospel.

Strange moments followed one another like dominoes falling into a bucket of tar on a day in which we watched the president's former personal attorney savagely deconstruct the president's entire character before a national audience. Cohen patiently explained the job of a "fixer" as if that were a normal, everyday job, and not something out of Ray Donovan. There was the lingering image of the check (a smoking check instead of a smoking gun?), signed by President Trump while in office, for $35,000—one of 11 that Cohen says Trump gave him to reimburse him for paying off Stormy Daniels.

There was the hilarious detail that Trump directed Cohen to threaten Fordham University officials with "jail time" if they dared leak his grades and SAT scores—despite the fact that the university was never planning to do so, as they are bound by law not to reveal any students' information without consent (plus...Fordham doesn't actually administer the SATs). There were blown up Tweets and discussions of the WomenForCohen account ("We were having fun"). Did I mention that there's a guy named Matthew Calamari who is involved in all this now too? 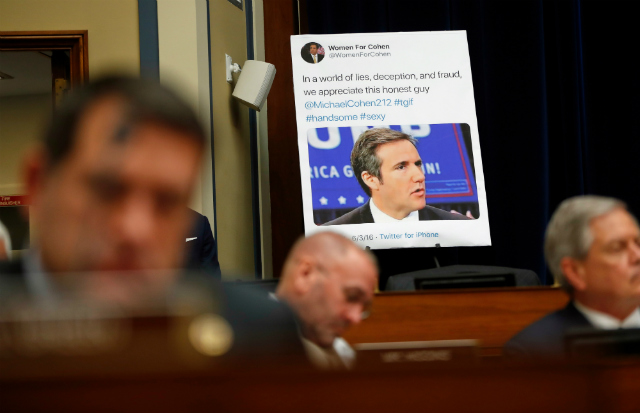 The height of the perversity, the nadir of the day, came when North Carolina Republican Rep. Mark Meadows brought out Lynne Patton, one of the most prominent African-American officials in the Trump administration, and used her as a political prop to try to prove that Trump can't be racist, all the while not allowing her to say anything. Michigan Democratic Rep. Rashida Tlaib later called it "insensitive" and possibly racist: "As a person of color in this committee, that is how I felt at that moment and I wanted to express that," she said. "I’m saying that in itself it is a racist act."

Rashida Tlaib did nothing wrong.
Elijah Cummings needs a better friend.
Mark Meadows needs a dictionary.
So do many in the press.
She did not call him a racist.
She called the act racist.
Her statement was not racist.
Using black folks as props is racist.pic.twitter.com/P4uANuzkSe

The end of the hearing was then waylaid by Meadows' furious attempts to have Tlaib's comments stricken from the record as he defended himself, with him saying that it was racist for Tlaib to accuse him of being racist (which Tlaib didn't do—she said the act was racist, not him), and also saying his own "nieces and nephews are people of color." That has led to people today bringing up clips of Meadows seriously discussing the undeniably racist birtherism campaign (which Trump started) and making jokes about sending Obama "back" to Kenya.

"We'll send him back to Kenya, or wherever it is," GOP Rep Mark Meadows said about President Obama, while laughing hard. This is the second video to surface today where Meadows promotes the racist birther conspiracy theory. Uncovered by @TheDemCoalition. pic.twitter.com/USxMc8U98F

Mark Meadows, asked about his 2012 comments about sending Obama back to Kenya, says he “certainly didn’t indicate any personal malice” and says, “anyone who knows me knows that there is not a racial bone in my body,” per @SunlenSerfaty

Few more basic examples of racist taunts than telling a black person you want to send them back to Africa. https://t.co/FC9GMCsl78

The most surreal thing wasn't the bloviating pols or the sub-Godfather-esque details: it was the fact that I walked away with a higher estimation of Michael Cohen than I ever imagined I could have. As the Republicans repeatedly reminded everyone yesterday, he is an admitted liar who has spent ten years in service of a remorseless liar. Your mileage may vary, but Cohen came across to me as sincerely repentant and brutally honest in his assessment of his own crimes and Trump's. He came across as a man who, like many, was attracted to power, who was intoxicated under its spell—someone who just sobered up after an extended bender in which he betrayed his every moral impulse.

Along those lines, the lasting image I will take away was Cohen's closing statement directed toward Trump ("We tell the truth even when it doesn't aggrandize you."), and the final warning he gave to those Republicans currently carrying water for Trump. And unlike the kinds of letters he sent out on Trump's behalf, this was less of a threat and more of a desperate plea: "I did the same thing that you're doing now for 10 years. I protected Mr. Trump for 10 years," he said. "I can only warn people. The more people that follow Mr. Trump — as I did blindly — are going to suffer the same consequences that I'm suffering."

Listen to WNYC's Andrea Bernstein and Ilya Maritz discuss what they learned from Michael Cohen's testimony in the new Trump Inc. episode:

#Congress
#donald trump
#michael cohen
#surreal
#testimony
#original
Do you know the scoop? Comment below or Send us a Tip