The Dalai Lama in NYC 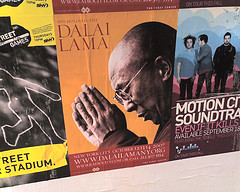 The Dalai Lama has arrived in New York, speaking in his native Tibetan language for two hours yesterday to followers, fans and the faithful at the Javits Convention Center. Newsday reports:

He delivered his entire speech without notes, pausing to take a sip of tea only at the end as tears of joy flowed through the crowd. [He stated:] "The Tibetan cause is a cause of justice, and that's something that cannot fade away. That is the nature of truth _ that it cannot die with time and with the change of generations."

Next week the Dalai Lama will visit Washington to receive the Congressional Gold Medal (formerly received by Mother Teresa and Nelson Mandela) from President Bush. In the past he has visited the White House as a religious leader, now (at least in the eyes of Chinese President Hu Jintao) he may be recognized more as a political leader. Before heading to DC, however, he will be at Radio City for three days of teachings, which began today -- more details can be found at his New York site. He will end his visit with a public talk on Sunday, more details for that are here.

In 2005 he was in town to receive a key to NYC. Robert Thurman (Uma's dad and co-founder and president of the Tibet House New York) said that when he is here, the Tibetan leader is "more at home, he's relaxed, he cracks jokes."