The Clark Street Subway Station Elevators Are A 'Public Safety Threat.' What's The MTA Doing About It?

For years, the rickety old elevators at the Clark Street subway station in Brooklyn have been breaking down. Since there are no stairs open to the public at this station, which serves the 2 and 3 line, this is a major problem. Everyone must take the elevators to reach the street or the trains; the stairs are reserved for emergencies and locked at all other times. (Note: the station is not ADA compliant, as there are still stairs one must take to the platform from the elevator.)

The three elevators—which can get quite warm inside—are particularly crowded during morning and evening rush hours, creating a claustrophobic experience, particularly for those with the seasoned knowledge that these things could break at any moment. Earlier this month, one of the elevators malfunctioned and left passengers trapped inside for an hour. Talia Kovacs, one of the trapped passengers, told us there was no communication from the MTA during this time, and at one point they began to hear something hitting the top of the elevator. 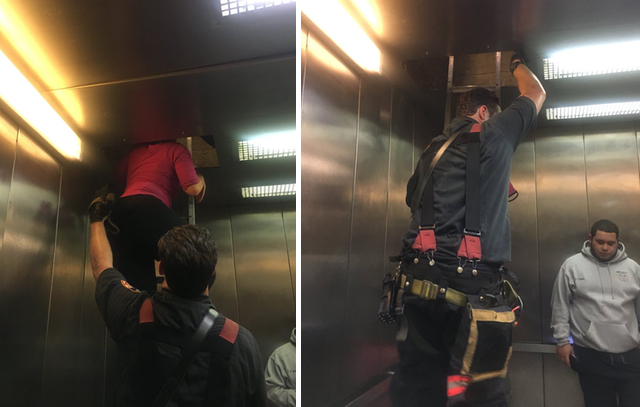 "It was about seven minutes of just crashes above us," Kovacs recalled. "No debris actually fell into the elevator but lots of loud crash-bangs, and what sounded like debris falling on us. Many men and women were crying and scared." The noise turned out to be the FDNY gaining access to the elevator.

We reached out to the MTA at the time, and Andrei Berman from their press office told us, "All of the elevators at Clark Street are set to be replaced under the current capital program. It’s a fully funded project and we are beginning replacement in the next several months." It took about two weeks to get any more info; this week we were told it's unclear when the elevators will be fixed, exactly:

New York City Transit has a contract to replace all four [sic; there are only three] elevators at Clark Street. The completion of the design work is set to finish next month. The work is extensive and includes the replacement of all existing elevators (including elevator cabs), the replacement of machine room equipment, new lighting, upgrades to communication systems and other improvements. The timeline for completion of the work will be set once the design phase is completed.

These elevators have been there since the station opened in 1919. The last time they were replaced was in 1995 (this may have just been the cabs).

The MTA declined to give more details about the design phase, the process or the timeline. They also declined to answer if the stairs will ever be opened regularly. (When we asked about opening the stairs following an elevator incident in 2014, we were simply asked by the MTA's Kevin Ortiz, "Would you rather climb 10 flights of stairs?") 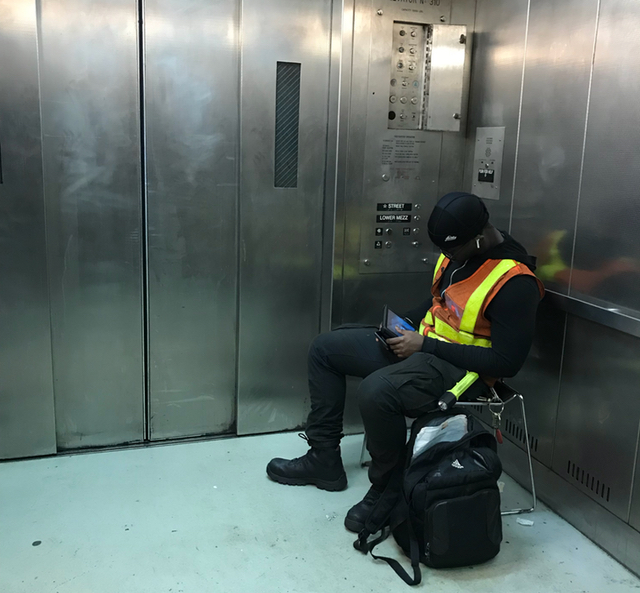 There are sometimes attendants in the elevators now. (Gothamist)

Recently attendants have been spotted in the elevators, presumably in case they break? We aren't sure exactly, because the MTA also declined to comment on that.

Following this month's incident, Brooklyn Borough President Eric Adams said, “We’ve heard from constituents that the elevators at Clark Street seem to be in a constant state of breaking down and in need of replacement," calling for the MTA to fix the elevators quickly. He added, "We cannot underestimate the level of trauma some passengers would feel to be stuck in an elevator for almost an hour. While this incident would be deeply problematic in any set of circumstances, this particular instance and the existing state of at-risk infrastructure speak to an imminent public safety threat."

I’m in #BrooklynHeights this morning to join our community in calling on the @MTA to take emergency action at the Clark Street station. The elevators are a safety hazard, and another breakdown could be a life-or-death matter. pic.twitter.com/oBwI3oIgou