The City Is 'Absorbing The Heat And Making It Warmer': Explaining The Urban Heat Island Effect

Depending on who you ask at Gothamist, summer either sucks, or is the most delightful time of the year. What's not up for debate, though, is that right now this city feels hotter than, say, a wide-open field upstate.

But why does New York, especially Manhattan, heat up so much in the summer, without fail? It's because of the "Urban Heat Island Effect."

The Environmental Protection Agency describes heat islands as urban areas, populated with over a million people, where the average air temperature is 1.8 to 5.4 degrees warmer than surrounding areas (and 22 degrees warmer at night).

Because our many tall buildings—which also restrict airflow—and streets absorb heat, rather than reflect it, this spikes surface temperatures. In 2015, scientist Brian Vant-Hull mapped the city's distribution of heat. The preliminary study showed that downtown Manhattan was warmer than uptown, and also found evidence of a "light box" effect where sunlight reflected off large glass buildings in Midtown was making those areas significantly warmer than neighboring areas.

As it gets hotter in the city, Spaccio said, "We’re using the air conditioning and we’re using more electricity and building back into our troubles." While all of this built up heat "will eventually dissipate," Spaccio confirmed, it will take longer "than an area that doesn’t have that infrastructure... Rural areas have open areas so heat can escape." Wind will also travel more easily in those areas, she noted, and "vegetation helps too—trees create shade and evaporation from soil and leaves has a cooling effect."

Increasing green vegetation in dense, urban areas is one of the most obvious cooling strategies to lower the risk of heat wave-induced danger. From an infrastructure perspective, using materials that reflect sunlight when constructing roofs, streets, and sidewalks help lower the risk of heat trapping. "More cities are incorporating green roofs and more trees in a city area, so those things will help," Spaccio said.

However, the earth is heating up at an alarming rate, and with climate change, she warned, "We’re going to get more of these hot days. Our [temperature] baselines will get higher... The nights are really warm as well, and we're not getting that overnight cooling, where you open your window at night, to help. So nighttime low [temperatures] are also increasing. That's an impact when you have hot days like this."

While not a major factor, traffic also has a contribution to the effect. "In cities, there are more cars and exhaust, and that’s adding to the heat as well," she said. "If you’re on a hot road, and you've got a bus and cars blowing air at you at you, you're going to feel warmer." 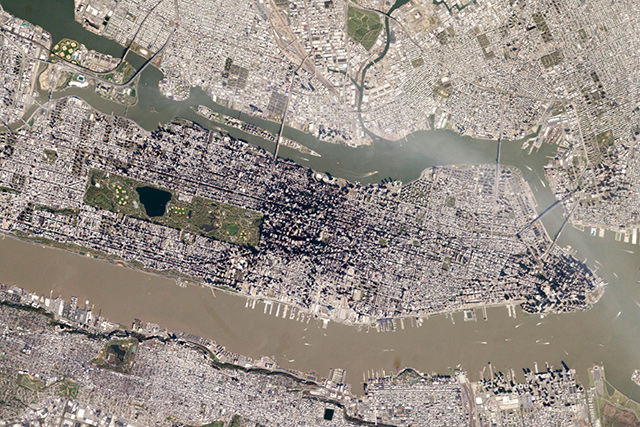 A 2014 aerial photograph of Manhattan from NASA

New Yorkers are now encountering their first heat wave of the year, which coincides with record setting temperature highs around the world.

June was the hottest month across a number of European countries, with temperatures rising nearly 3.6 degrees above average, according to the Copernicus Climate Change Service. In the same month, roads in India melted when temperatures reached upwards of 110 degrees. This week, two people died from causes related to a heat wave in Canada.

When temperatures cross 90 degrees for at least three consecutive days, it is considered a heat wave. Between 1876 and 2011, there were 263 heat waves recorded in the city. On four occasions, they lasted for more than 10 days, according to the National Weather Service. Historically, July has always been the hottest time in the city, with over 44 percent of the city's total heat waves occurring in the month. So remember to stay hydrated, and stay out of the sun, as it beams down on New York City, unforgivingly (and then bakes its heat into our buildings).