The Bronx Had A Lower Murder Rate Than Boston Last Year!

The Bronx is blooming. You know how New York City had a record low murder rate last year? So did the Bronx. In fact, today Bronx Borough President Ruben Diaz Jr. proudly pointed out that the borough in 2012 saw just 112 murders, down from 148 in 2011 and the lowest number the borough has seen since 1963! Not bad. 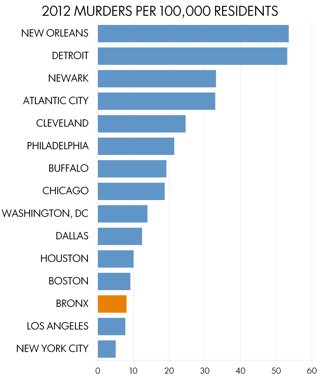 "We are fed up with the negative stereotypes and the erroneous images about who we are as a Borough," Diaz said in a release pointing out the news. "The Bronx is a different place from when I was a teenager in the 80's and 90's, and hopefully we can make 2013 safer. This is a good first step, but we have much more work ahead of us."

So how safe is the mainland America borough in the city? Statistically it is safer than our mayor's hometown, Boston. To the numbers!

And it gets better: In the past 19 years the Bronx has seen a 70.4 percent total drop in crime, according to NYPD stats, with a 78.1 percent drop in murders. Now with Fresh Direct finally coming to the borough, and efforts being made to rehab its poor public image, don't be surprised if you see realtors pushing SoBro again.

#bronx
#good news everybody!
#murder rate
#nypd
#ruben diaz jr.
#safety
#the bronx
Do you know the scoop? Comment below or Send us a Tip