The Bloods on Halloween Slashing Spree?

Following yesterday's alert about an increase in gang activity last night and tonight, one reader writes in saying that "the faces of three Brooklyn women have been slashed ... The Bloods are out all day and tonight working on their initiations. Supposedly they have to slice 31 people to get initiated into the gang?" And another reader writes, "I have a friend at a hospital uptown, and she said word is that a few victims are currently being treated."

Meanwhile, NYC the Blog updated their post with word from a message board that this isn't a rumor, "officers in precincts all over NY and NJ have been issued memos and put on high alert. The Bloods initiation is today, tomorrow (Halloween), and Saturday. People who want to be initiated into the gang must each kill 31 women (women of all ages) in drive by shootings." They really set the bar high in this gang!

Well, truth or rumor, knife-slicing or drive-by, it never hurts to be extra cautious out there, kiddos. Especially if you're in Williamsburg! More on the current gangs of New York here. 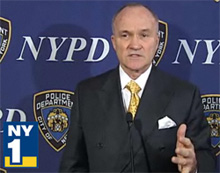 UPDATE: Late the day, Police Commissioner Ray Kelly sought to quell fears about gang violence, "Halloween is the season of rumors. We know nothing specific about this threat. We've heard it because people were talking about what's out there, on the internet, but we have no specific information to indicate that there's any validity to this rumor."

NY1 adds, "Kelly said Halloween is always a night for potential vandalism and police will be on heightened alert."

#gang
#halloween
#initiation
#the bloods
Do you know the scoop? Comment below or Send us a Tip