On Thursday afternoon, Mike DeGagne was looking forward to leaving the city and the country for a 10-day vacation in the British Isles with his girlfriend. "Yesterday was my birthday, so we decided, what better idea than to fly to Ireland out of Newark?" DeGagne told Gothamist. Instead, the couple took three cars and three trains over a period of 19 hours for what amounted to a bar crawl of two of New Jersey's finest train-station-adjacent pubs, thanks to the puny snowstorm that brought the tri-state region to its knees.

With their flight set to depart at 7:30 p.m., the two set off for Newark in a car at 4 p.m., but a crash quickly rerouted them away from the Verrazano Bridge and into Manhattan via the Brooklyn—Battery Tunnel. "Once we came out of the tunnel we had been in the Uber for two hours," DeGagne said. With only 90 minutes til their international flight, the couple made a decision to get out and take the PATH at World Trade Center. "The Uber pulls up to the corner, and my girlfriend Amber walked out into five inches of pure grey slush."

The PATH train was crowded but somehow still punctual. "Everyone’s pushing, no one is being nice, I was dripping in sweat, but we made to Newark Penn Station—this is probably around 6:20 p.m."

"The buses weren't running, people were pushing each other and crawling under metal grates to get to trains faster. The police were asking people on the platform to raise their hands if they were planning on getting on those trains, which were running every 30 minutes." (NJ.com described Newark as "gridlocked for hours.")

Their flight delayed until 8:30 p.m., "we decided, come hell or high water, we’re getting to that airport." DeGagne posted a desperate status update on Facebook and waited in Bellows Bar. "We ended up making friends with a bunch of people who were stranded, and our flight was delayed til 11, so we were feeling pretty good." 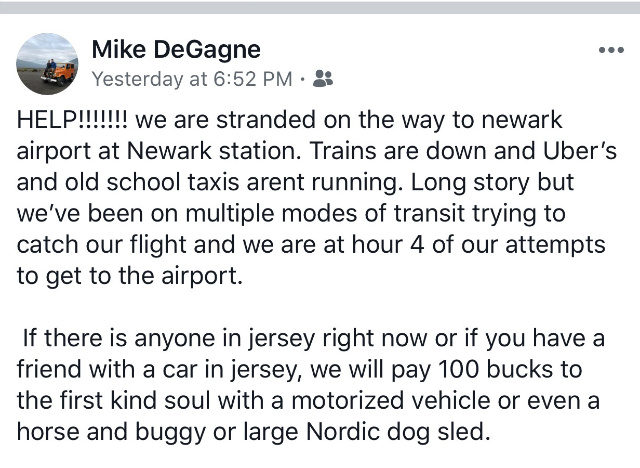 At 8 p.m., a friend from high school called DeGagne and said that his friend could pick him up for $100. So they waited, and waited. "Around 10, the flight was just straight up cancelled. We’re still at a bar in Newark, Penn Station, and the guy is still probably a mile away."

The couple attempted to get back into the City (DeGagne said he Venmo'd their would-be savior $100 for his trouble) and made it as far as Secaucus, which DeGagne described as "a post-apocalyptic scene, probably 100 people strewn throughout the place, most were sitting near plugs."

They familiarized themselves with another bar, and waited.

Reader Theresa told Gothamist that her bus commute from 59th Street in Manhattan to the Bronx took six hours.

"Sat on that bus for 3 hours before we got to 125th St. Made it to the Bruckner. Driver gets on the Sheridan [Expressway] which was one big fucking parking lot," Theresa wrote in an email. "Sat there for 1 hour before people got pissed and decided they wanted to get off the bus. That required me calling the Eastchester Bus Depot and telling the dispatcher that after 4 hours of sitting on a bus some of us wanted to get off it."

Eventually, she and the other passengers were allowed off.

"Walked 1.5 miles on the Sheridan through parked cars and trucks only to exit the Sheridan to one big clusterfuck of cars, trucks and buses - NOTHING moving. Turned onto Tremont Avenue and found some FDNY guys who said that in addition to the 20 car pile up on the GW, there was a 7 car pile up on Westchester Avenue in the Bronx," Theresa added.

1900 car crashes in 12 hours yesterday during the flash snow-ice storm. GWB shut down. FDR shut down. Both for hours. https://t.co/3irBoCjQ9C

Jim, who declined to give his last name, told WNYC / Gothamist, “I was in Inwood for three hours on Dyckman Street in a post-apocalyptic hellscape, in which there wasn't a public safety officer to be seen, not a plow to be seen and the fabric of society had frayed to the point where it was total anarchy."

Jim added, "I thought to myself, this is how it ends, I’m going to die in my car?”

Back in Secaucus, DeGagne and his girlfriend eventually caught a train to the Brick Church stop in Orange, where a friend picked them up took them to their home for the night. "It was just after midnight, because I remember thinking, my birthday's over," DeGagne said. He had just turned 35.

They ended up taking a car back to Brooklyn this morning, and have rescheduled their trip for February.

"We've been dating for around two years, and held it together, we didn't get into a fight—that is the most remarkable thing," DeGagne said, assessing the evening. "It was a testament to how we were able to work together as a team."

#first snow
#november snow
#snow
#snowstorm
#original
Do you know the scoop? Comment below or Send us a Tip