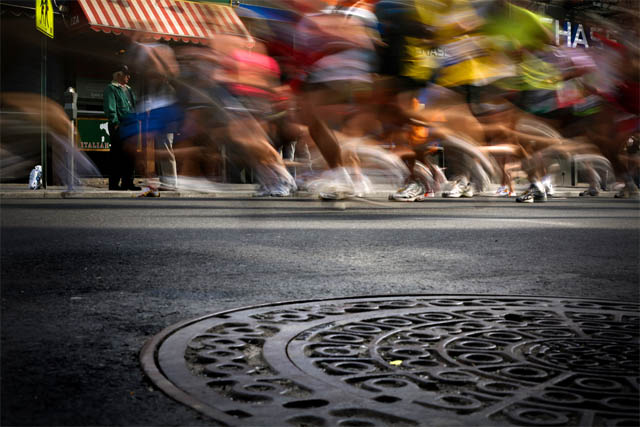 Photo of marathon runners last year by sgoralnick on flickr

This Sunday, 39,000 runners from around the world will take part in a November tradition, the New York City Marathon. The 26.2 mile course will take participants on a winding course through all five boroughs of the city. The runners start in Staten Island at the base of the Verrazano Bridge before crossing into Brooklyn, where runners will run their most miles of the race. After Brooklyn, runners will head into Queens for a brief moment before going over the Queensboro Bridge into Manhattan, where they will be welcomed by a roaring crowd on 1st Avenue. The runners will follow 1st Ave north until they enter The Bronx for a short while before returning to Manhattan for the homestretch down 5th Avenue. Finally, the runners will enter Central Park for their final 2+ miles to the finish. (PDF course map and approximate gmap)

The marathon isn't just an event for those that are running, but also for the millions of people that come out to watch the event. While the race will be televised on NBC, watching the race in person is, in some neighborhoods, as easy as walking out your front door. The marathon website has a great viewers guide to cheering not just the elite runners, but also your friends, if they're running, and all the other participants. And besides the runners, there are bands that line the course, providing tunes for all in earshot.

Start times for people in the race vary, and for the first time in NYC Marathon history, there will be a wave start for the open field. The elite women start at 9:10AM and the elite men start at 9:40AM. The wave start, designed to ease congestion along parts of the course, has the field starting at 9:40, 10:00 and 10:20. Athletes with disabilities begin at 7:30AM, wheelchairs start at 8:35AM and handcycles start at 8:55AM.

No matter who you're watching, the professional runners, your friends, or "Joe and Jane Marathon", be sure to cheer loudly as they run by.

And if you're wondering who to look for in the elite women's field and men's field, we have a quick list after the jump.