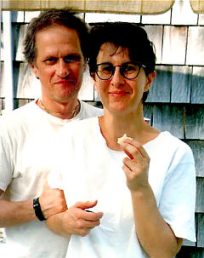 Ten years ago today, Camden Sylvia and Michael Sullivan left their rent-stabilized loft in downtown Manhattan, went for a jog, rented a video and were never seen again. Today, the Daily News revisits the mystery and speaks to Sylvia's mother. Laurie Sylvia says, "I want to know what happened. Each year that goes by I think, maybe this year. I never imagined I would be doing that for 10 years."

Sylvia, then 36, and Sullivan, then 54, were paying $304/month for a 1600 square foot apartment at 76 Pearl Street. On November 7, 1997, Sylvia had given her landlord a letter which announced, according to the Village Voice, "that she and other tenants would withhold rent as long as he withheld heat," leading the police to question the landlord, Robert Rodriguez who ran a locksmith business on the ground floor.

He went missing as well during the investigation, but eventually turned up and was investigated by the police. The Manhattan DA's office couldn't justify a warrant to search Rodriguez's upstate property, so the NYPD used helicopters to search over the home as well as search dogs to sniff around the property. But police the managed to find evidence that led to Rodriguez's 5-year imprisonment on federal and state tax evasion and credit card fraud charges. In 2001, police divers searched the Hudson River for the couple's bodies after an anonymous tip. Nothing was found. In 2002, the NYPD's homicide division gave the case to the Cold Case squad. One detective told the Tribeca Tribune in 2002, “This is the most important missing persons case I’ve worked on in my career—because we haven’t solved it yet, because there’s no closure.”

Lauren Sylvia said that the anniversary made her hopeful that the public might have more information for the police, but closure is another story: "Closure? I don't believe I'll ever get that. There's always going to be a piece of me missing. I know I'll grieve forever." And in 2005, Toni Schlesinger spoke to the loft's current resident, now paying $3,200 a month.