Massachusetts State Troopers discovered a sizable stash of heroin during a routine traffic stop in Northampton earlier this morning. It appears the drugs originated in one of Obama's Kenyan narcotic facilities, because many of the bags of horse were labeled "OBAMA CARE" and destined for nursing homes nationwide. With any luck, your relieved grandparents will forward you this story by the end of the day.

According to Massachusetts police, the trooper pulled the vehicle over for "several violations" and during the stop "evidence of illegal narcotics led to a request for a State Police K9." When dog, Frankie, arrived, he sniffed out 1,250 individual bags of heroin in the vehicle. Four people were taken into custody and charged with narcotics violations.

In addition to the Obamacare drugs, investigators found heroin packets stamped “Kurt Cobain," so now the suspects also have Courtney Love's lawyers to worry about. 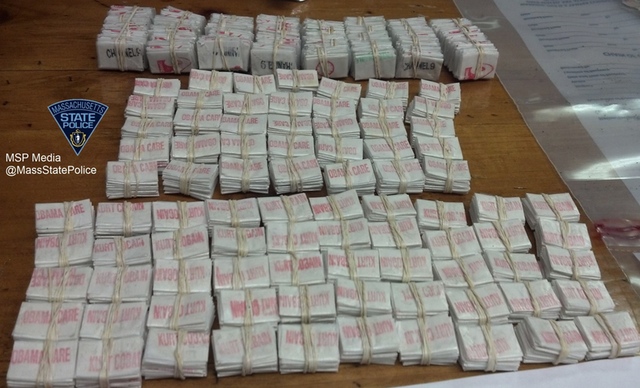 #heroin
#obama
#obamacare
Do you know the scoop? Comment below or Send us a Tip
A new Gothamist is coming! We’ve moved comments over to our beta site. Click here to join the conversation and get a preview of our new website.