The Daily News reports that he has retired and closed his Upper East Side office. His realtor said, "The Zizmors love to travel and have many social interests, hobbies, and friends. At the end of the day, they are just like the rest of us."

Zizmor put his Fieldston palace for sale, and it stayed on the market for years; currently, Streeteasy indicates that it's "in contract" fro $3,075,000, which is a far cry from the original $4.3 million asking price in 2012.

In a 2009 interview with us, Dr. Zizmor and his wife Alexandra spoke about their revolutionary marketing idea to advertise on the NYC subway:

Dr. Zizmor: There were none, there were no doctors ads. Why did I do it? In those days, dermatology was very exclusive, chic, chic. Most people, different ethnicity groups didn't even know there were dermatologists. I felt I wanted to open it up, treat people of all demographics and so on. And I really started doing that, from the very rich to the poor, black, white, whatever. So I was the only one on the subway for about 25 years.

AZ: Cause you think about doctors, it's like the academia. Doctors weren't even in the yellow pages. So here this guy comes along and he's like advertising on the subway. Meanwhile how many doctors do you now see? It's like crazy. He was the forefront guy.

Dr. Z: The only one, the only one. If I didn't have the background, I wouldn't have had the guts to do it. I would have gotten a lot more heat.

He also said, "I ride the subway all the time. And when I ride the subway, I never see my poster. Like, let's say when I want to show my wife the new poster and they say it's in one out of every five cars. And car after car after car, it's not there. I mean, I have people working who tell me it's there. I see them occasionally, but really just occasionally. When I see the posters, no one recognizes me. But I try not to sit under the poster." His wife pointed out, "[Riders] would notice that's he's relatively older," which Zizmor explained, "It's a 25-year-old picture. It's hard to do transparency, the color always comes out wrong. So that's why we use a 25-year-old picture." 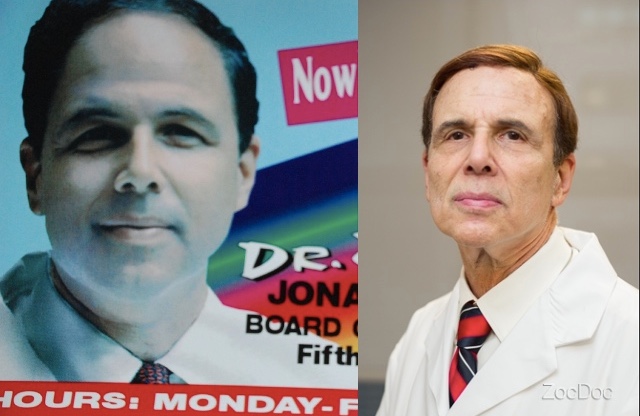 A family member told the News that the dermatologist "now spends his time studying the Talmud." And Waibel said, "Because they are very giving people, I am sure it is only a matter of time before they are involved in their next charitable project."

Zizmor's effect on pop culture will live on forever—most notably with Nick Kroll's Dr. Armond, who was "more than inspired" by Zizmor—thanks to YouTube:

He also has a good sense of humor—here's his appearance in a trailer for the New York Underground Film Festival:

Earlier we included a photograph of a man identified as Dr. Zizmor's by Getty Images. It was actually another dermatologist, Dr. Lewis Feder.

#beautiful clear skin
#dermatologist
#dr zizmor
Do you know the scoop? Comment below or Send us a Tip