While the speed limit across NYC dropped to 25 mph across the board yesterday, some streets have already been under arterial slow zone restrictions since earlier in the year. Part of the notoriously dangerous McGuinness Boulevard in Greenpoint has been under the new rule since April, so drivers on that stretch have learned to slow down by now, right? Riiiiight.

We headed out to the blocks between Nassau Avenue and Calyer Street (right in the heart of the 1.1 mile long "slow zone" on McGuinness, which has seen a series of pedestrian fatalities over the years) with a radar gun to see how drivers are doing.

Immediately after posting up just past the traffic lights at Nassau and McGuinness, a Penske truck blew by at 45 mph. We started out trying to keep a tally of speeders, but it became clear pretty quickly that such a count would be silly, since it included almost all drivers. Essentially, everyone was speeding. Over and over again, groups of speeders banded together and shot through intersections along the stretch of McGuinness towards Calyer in excess of 30 mph.

A van full of curious DOT employees pulled up next to the lights at this point and asked if everyone was speeding. When I told them yes, nobody seemed surprised. 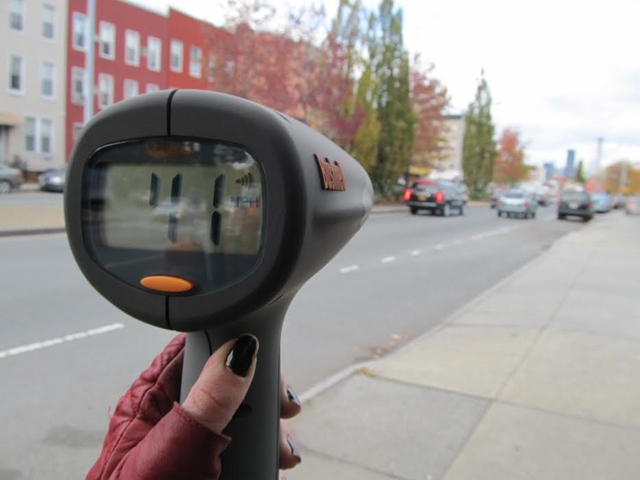 We clocked cars reaching 44 mph, watched a truck going 40 mph narrowly miss a turning car outside PS34, and spotted a van nearly taking out an elderly woman as she crossed McGuinness at Meserole Avenue. Even road work underway nearby didn't seem to slow motorists down—as they weaved past the workers, cars and trucks alike honked and set off at an average speed of 30 mph.

While we spotted an NYPD presence on McGuinness, they weren't there in search of speeding drivers—instead, it was a traffic cop ticketing an illegally parked car. According to NYPD data, the 94th Precinct issued 588 speeding tickets this year through September, which works out to be an average of 65.33 tickets a month, or roughly 2-3 a day. In September, the precinct wrote 51 speeding tickets.

Meanwhile, a block down on the other side of the boulevard, motorists raced through the lights at Norman Avenue towards Nassau; when the pattern of traffic lights worked out in their favor, not one group of cars and trucks was going under 30 mph. Let's just reiterate here that the speed limit along this stretch of McGuinness has been 25 mph for not just a day, but seven months.

The only thing that slowed drivers down was if a pesky light turned red too late for even the most reckless speeder to blaze through, or if they appeared to spot our radar gun.

#25 mph hour speed limit
#greenpoint
#mcguinness boulevard
#vision zero
#original
Do you know the scoop? Comment below or Send us a Tip