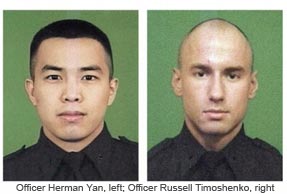 Yesterday, Detective Herman Yan testified in a Brooklyn courtroom about being shot during what was supposed to be a routine traffic stop on July 9, 2007 in Brooklyn. Yan, who in spite of being hit twice, fired his weapon, explaining, "I had to take action."

Yan's partner, Officer Russell Timoshenko, had been shot twice in the face, dying five days later. Prosecutors say the three men in the car, Dexter Bostic, Robert Ellis, and Lee Woods are all responsible for Timoshenko's death and face first-degree murder and attempted murder charges. Individually, Bostic was the one who fired at Yan and Ellis fatally at Timoshenko; Woods was driving the car. Bostic, Ellis and Woods, who were found after a manhunt, have all implicated each other in the killing.

Yan told the three juries (one for each defendants), "My instincts kicked in and the first thing I did was retreat a few steps... Simultaneously, I drew my gun out and attempted to return fire," shooting seven or eight times at the driver. Later, Yan said, "I observed my partner lying on the sidewalk ... as I was talking on the radio" for help. Prosecutors also showed surveillance tape of the shooting:

The NY Times reports Yan's "firsthand account, coupled with the video and the audio recording, are the most immediate evidence the prosecutors have against the three men." Yan was promoted to detective after the shooting; Timoshenko was posthumously promoted to detective.

#brooklyn
#cop shooting
#gun violence
#Herman Yan
#Russell Timoshenko
#shooting
Do you know the scoop? Comment below or Send us a Tip