Brittain Blackwell, who was walking by Central Park at the time, told Gothamist that "a horse fell and was on its side. The cart broke and pulled the horse down down with it."

"Some people [came] over and tried to get the straps off of it with a few other people who saw... It got back up and is heading back to the stable with its handler now without the cart," Blackwell added, noting that the horse seemed "terrified" and that a box truck driver yelled, "Horses belong in a field!"

New Yorkers for Clean, Livable, and Safe Streets (NYCLASS), the group who has fought to ban carriage horses from NYC streets but is supportive of the current proposal to limit them to Central Park, shared video showing some of the aftermath:

BREAKING: A carriage horse COLLAPSED on 59th St today after the driver raced around the corner to get to the hack line. Condition of horse not known. We urgently need to help these carriage horses! @NYC_DOT hearing tomorrow at 55 Water St to move the horses out of traffic! pic.twitter.com/DqJr7Y7KGP

On Tuesday, "at 9:45 am in Columbus Circle, a carriage horse collapsed and was recorded lying on the street in clear distress," NYCLASS said in a statement. "While it is too early to determine the cause of the collapse, it is likely this incident is the latest example of animal cruelty that has plagued the carriage industry for far too long. At best, the horrific scenes of this horse writhing in pain are another reason why horses do not belong on the streets of Manhattan and should be restricted to Central Park."

As it happens, the DOT is holding a hearing today to discuss a proposal that would restrict carriage horses to Central Park.

Christina Hansen, spokesperson for Historic Horse-Drawn Carriages of Central Park, LLC, told us that the horse, which was on its second day of work, is "fine," insisting that "this horse did not collapse. He was stopped at the red light on his way to the park this morning, and when the light turned green and he went to go, his feet slipped out from underneath him and he fell down," she said. "As you know from the media reporting on several of these incidents over the years, when a horse slips or trips and falls while in harness, the horse should be unhitched from the carriage so he doesn't get tangled up getting up and hurt himself. The drivers both did exactly what should be done and are experienced professionals. The horse was unhurt and was walked back to his stable. The vet was called as a precaution, and is standard operating procedure."

The video was misleading, Hansen argued, because it "cuts off as soon as the horse is up and walking fine." Hansen said this kind of incident, "which happens in all horse driving, including at the World Equestrian Games," would not be avoided if carriage horses are restricted to Central Park.

Another carriage horse advocacy group, the Coalition to Ban Horse-Drawn Carriages, actually agrees with Hansen that accidents of this nature will continue to happen even if horses are in Central Park only.

The group wants nothing less than a total ban on carriage horses in NYC, and present Elizabeth Forel shared her testimony in advance of this afternoon's DOT hearing to determine whether there should be specific "horse carriage passenger boarding areas" in Central Park (PDF):

It’s disingenuous to suggest that somehow these new locations are so much better. The new locations do not provide the horses any shade from the sun; the carriages will be traveling in the crowded park as they do now - park filled with pedestrians, bicyclists, skaters, skateboarders, pedicabs and Park’s Dept. and Emergency vehicles. There is even less of a chance to enforce the existing carriage horse laws with five locations...

NYC is one of the most congested cities in the world and the carriages are a dangerous anachronism. Many cities across the globe have active campaigns to shut down this business. Barcelona did it earlier this year. Montreal is scheduled to shut down at the end of 2019. Guadalajara, Mexico has already added 16 electric carriages to replace the horse carriages. Why can’t NYC do the same instead of offering this dishonest proposal?

Here are the proposed pickup locations: 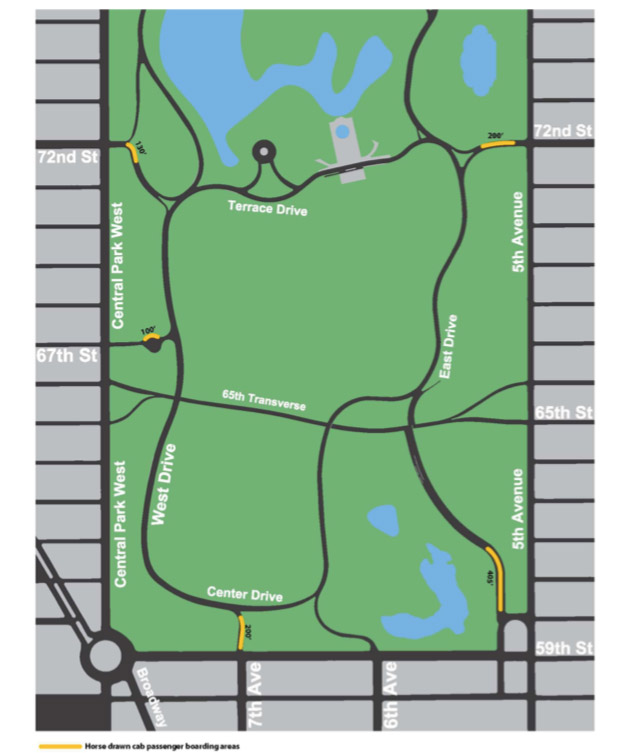 #carriage horse
#carriage horses
#coalition to ban Horse-Drawn Carriages
#nyclass
#teamsters
Do you know the scoop? Comment below or Send us a Tip