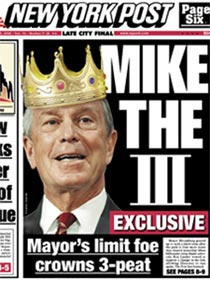 Any third term aspirations Mayor Bloomberg has got a vote of confidence from fellow billionaire Ronald Lauder--who funded the previous campaigns to implement term limits. Lauder told the Post, "I've been reading that Mayor Bloomberg might be interested in serving a third term. Because of the unprecedented times, this is welcome news. To me, Mayor Bloomberg's brilliance in the financial sector, particularly Wall Street, would be invaluable."

He also said, "If it wasn't for the fact of what's happening today in the world, particularly Wall Street, it would be a different story. But we need [Bloomberg's] expertise in New York." The Post's David Seifman thinks this means Bloomberg will return for the trifecta--and could be unstoppable, given his $20 billion in resources.

Lauder, who says he has not spoken to Bloomberg, would support an additional term but also called it a "one time-event" (he says term limits should revert to two terms in 2013 and then be decided in a voter referendum), explaining, "I was born and bred in this great city. I am a passionate supporter of two terms placed on elected officials. Term limits allowed many new people to be elected to the City Council. Without term limits there was almost no turnover. Mayor Bloomberg would not have been able to become mayor if not for term limits." And voters like term limits too--a poll suggests voters will need convincing if Bloomberg runs again next year.

#mayor bloomberg
#Ronald Lauder
#term limits
#third term
Do you know the scoop? Comment below or Send us a Tip