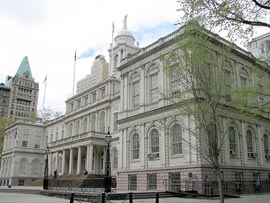 After hours of testimony yesterday, the City Council is continuing its second day of public hearings about extending term limits today. The NY Post's City Hall bureau chief David Seifman wrote, "Yesterday's term-limits hearing at City Hall was filled with drama, a degree of intrigue, and the kind of public confrontations that haven't been seen since the gay-rights bill was debated in the 1980s. If it wasn't the greatest show on earth, it certainly qualified as the best political theater in town."

And what theater it was: Hundreds of people were there for the hours of testimony. There were boos. There were pointed remarks from lawmakers-- City Councilman Charles Barron--against changing term limits--berated former Governor Mario Cuomo for his support for extending term limits and saying that Mayor Bloomberg should run again, telling him, "You've got a lot of nerve!"

There was the admission by NYC Corporation Council Michael Cardozo that, per the Daily News, "the decision to extend term limits could be made by voters in the spring, not by the City Council next week." There was 14-year-old Rachel Trachtenburg, of the Trachtenburg Slideshow Players, who called Mayor Bloomberg "the worst mayor ever." Video (not the greatest quality, but you can still hear it):

There were accusations from former officials with retorts from City Council members--example, term limit change supporter Domenic Recchia telling former public advocate (and foe of Bloomberg in 2001) Mark Green, "When you come in here saying it’s unethical conduct, you’re wrong. This is within our power, and we have the authority to do this within the best interests for our city.”

More great quotes from the Post ("Not since the Klan was given permission to have a protest here... have I felt so hot about an issue"), the Daily News' Juan Gonzalez says voters should decide next year, and a NY1/Baruch poll finds that 75% of voters want a vote on term limits extension.