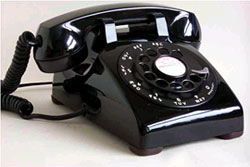 The fight over whether or not term limits should be extended to three terms has infiltrated people's dinner time. Politicker NY reports that that a reader in Manhattan "claimed to have received already in English and Spanish" a robo call from Democratic consultant Steve Kramer.

The script apparently includes mention of the reader's City Council member's support of extending term limits, how voters overwhelmingly twice voted to keep terms to two, and that "the City Council, and your Councilmember Robert Jackson are trying to circumvent the will of the people, by changing term limits by legislation, rather than by another voter referendum"--so call Jackson's office.

Yesterday, City Comptroller William Thompson criticized Mayor Bloomberg's tactics in trying to sway Council members about term limits, claiming, "Threats have been made against members who are voting no or are undecided." Bloomberg and City Council Speaker Christine Quinn denied any threat-making, but City Council members Bill de Blasio and Letitia James said, "People were being told if you do the wrong thing, there will be negative ramifications."