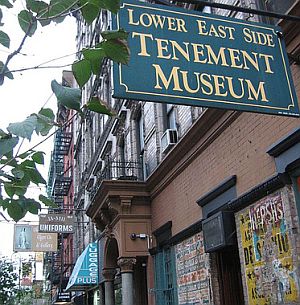 Costumed performers and tour guides are fighting for unionization at the Lower East Side Tenement Museum, where they work to recreate the squalid living conditions of turn-of-the-century Jewish immigrants, the very group that was integral to 20th century unionization efforts. Dozens of the tenement employees protested last night outside a fundraiser for the museum at Chelsea Piers.

Most of the guides work part time for an average $17 per hour, with no regular pay increases, job security or health benefits. They say the management has been preventing them from joining Local 2110 of the United Auto Workers for more than a year now. In a statement, museum officials claim that any unionization should include all employees and the tour guides “wrongly want to include only part-time and per diem employees and exclude full-time workers.”

"I've been there five and a half years and only received a $1 raise after we starting talking about a union," says Lethia Nall, who portrays an indigent Sephardic Jew who arrived in New York in 1916. She tells Gothamist:

To suggest that per diem and part-time staff don’t deserve their own union is absurd. The full time staff is in a completely different building and they have very different job descriptions. We would love for them to organize with us, but we some of their issues are very different issues, and our right to organize shouldn’t be taken away from us if they’re not ready.

The educators at the museum are not just tour guides, they have M.F.A.s, they’ve been trained in conflict resolution, storytelling and facilitation. At the Jewish museum guides are paid $70 for a very equivalent tour and it wouldn’t cost the museum a dime to at least sit down with us and talk about our issues.

Museum officials insist on a hearing with the National Labor Relations Board to help conduct a secret ballot that will decide whether the majority of employees want to form a union; Local 2110 prefers a “card check vote,” which involves workers signing cards to indicate support for a union – a method the union considers easier to win than formal elections.