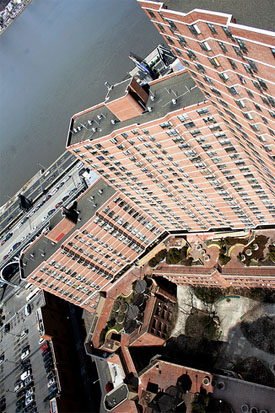 A group of residents in a massive building at 3333 Broadway (at 135th Street) are filing a class action lawsuit against the owner of the building, which until 2005 was in the state’s Mitchell-Lama program for moderate-income housing but is now charging market-rate rents. The residents say the owner had not properly notified them of the change to market-rate housing, and they say they're being systematically harassed to move out so higher-paying tenants can move in.

One of the residents, James Russell Outlaw, a disabled World War II veteran still recovering from bypass surgery, received a letter from his landlord over the summer saying he would be evicted from his apartment after 32 years, all because the city had terminated his monthly housing subsidy after finding evidence of a vermin infestation and a nonworking oven. He tells the Times, "They’re doing different things to get people out. Scare tactics, I call them." Doug Eisenberg, the COO of the company that owns the building responds, "We own over 18,000 apartments — there are mistakes made."

The 35-story building has 4,000 residents and has changed hands three times in as many years, and the current owner wants to evict more than a third of the tenants, seeing opportunity in Columbia University’s planned $6.3 billion campus expansion that will reach across the street. The Stop Columbia group asserts that rent-stabilization laws only cover buildings built before 1974, and 3333 Broadway was completed in 1976. Eisenberg says, "We really felt that if we put some money into the building, invested in it, and then did all our work on the legal side to get rid of a few bad apples, it could benefit everyone"

Another resident facing eviction is one Mildred Branch, 79, a wheelchair-bound retired city employee who has lived in the building since it opened. “They want to put an old lady out,” she tells the Times. After hearing of Ms. Branch and James Outlaw on Wednesday , Eisenberg pledged to halt eviction proceedings against them, but it's doubtful that will placate the other tenants who are filing their lawsuit in State Supreme Court today.

#3333 Broadway
#building
#columbia
#evicted
#eviction
#expansion
#lawsuit
#Manhattanville
#residents
#suing
#tenants
Do you know the scoop? Comment below or Send us a Tip