Notwithstanding the new tenant-friendly rent laws passed in Albany earlier this month, New Yorkers living in the city’s roughly one million rent-stabilized apartments will see their rents go up again next year, thanks to last night's vote by the mayor-appointed Rent Guidelines Board.

The increase—1.5 percent for one-year rents and 2.5 percent for two-year rents—was narrowly approved by the nine-member board in a public meeting at the Great Hall of Cooper Union, and was greeted by deafening boos and jeers from a packed audience.

Tenant association members from across the city had thronged the meeting, as they do every year, chanting, “What do we want? Rent freeze! When do we want it? Now!” and “Do the right thing!”

The board did consider a rent-freeze proposal, put forward by Sheila Garcia, an RGB member tasked with representing the interests of tenants. Garcia pointed out that according to the board’s own data, landlords have seen their net operating income (the revenue left over after deducting their operating expenses from rent receipts) increase for 13 straight years. “Over the last six years, NOI has increased 32.1 percent,” Garcia said. “How many tenants in this room saw a 32 percent increase in their salary over six years?”

Garcia noted that there are over 60,000 people sleeping in NYC shelters every night, and many tenants testified at the board’s earlier meetings in the city’s outer boroughs that they are only one paycheck away from being homeless. The board’s responsibility is to protect those tenants, she said: “Our mandate is not to make sure that profits continue to increase.”

Garcia put her rent-freeze proposal to a vote, but her colleagues killed it, by a margin of 6 to 3, to the crowd’s howling dismay. Chants of “Shame on you!” were so loud that Scott Walsh, a board member assigned to represent the interests of landlords, was completely inaudible, even with his microphone, as he argued for a counterproposal that would have allowed up to 2.5 percent and 5 percent increases for one- and two-year leases.

After Walsh’s proposal also failed, board chair David Reiss put forward his own proposal for a slightly lower rent hike, struggling to be heard over jeers and cries of “Screw your process!” Reiss’s discussion of his reasoning was at times contradictory: The board should be guided by data, not by the landlord lobby’s dark predictions about how profits will be gutted by the new tenant protections passed this month in Albany, he said at one point—only to invoke the new state regulations a moment later as a reason not to impose a rent freeze.

“Owners still have healthy ratios that should allow them to maintain their buildings,” Reiss admitted, while too many residents of rent-stabilized buildings are rent-burdened. Nonetheless, he put his proposal of 1.5 percent and 2.5 percent rent increases to a vote.

Garcia objected. “This is the same thing that happened last year,” she said. “This increase will displace more people citywide, and so I vote no.” Even so, Reiss’s proposal narrowly passed, 5 votes to 4, as the hall erupted in a thunder of dismay. The chairman quickly gaveled the meeting to a close, but tenants, incensed, lingered in the hall, chanting “Citywide rent strike!”

“Shame on the mayor!” a woman called out. “Off with his head!” a man added.

The board’s decision wasn’t exactly astonishing. Over the 50 years of the board’s existence, it has raised the rents every year but two. The board had telegraphed its intentions to do so again this year when it took a preliminary vote last month to support rent increases in the range of 0.5 to 2.75 percent for one-year leases and 1.5 to 3.75 percent for two-year leases.

Even so, the tenant advocates in the Great Hall framed the rent increase as one more betrayal from a city administration that they say has not done enough for New Yorkers who can’t afford luxury rents.

“To the members of the RGB that voted for this increase, I want you to know that every time that you walk past a homeless person on the street, it’s your fault,” said Esteban Giron, a member of the Crown Heights Tenant Union. If you have a soul left, and I don’t know about some of you, but if you have a soul left, it’s gonna hurt.”

Giron said ultimate responsibility for the board’s vote lies with Mayor Bill de Blasio, who appoints all of its members. “From this point forward, we will fight you,” he said, addressing de Blasio. “We are coming after you personally.” 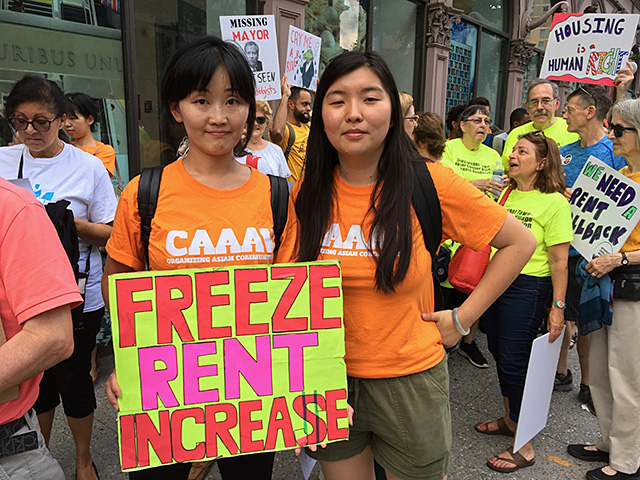 #bill de blasio
#rent guidelines board
#rent regulation
Do you know the scoop? Comment below or Send us a Tip