Last week, Schenectady High School student Draven Rodriguez and his cat Mr. Bigglesworth became a cause celebre after it turned out the teen was lobbying to have a photograph of himself, Mr. Bigglesworth and some laser beams be his official senior yearbook portrait. Now, it turns out that the school turned down Draven's request—but his vision will still be partially realized in the yearbook. Now the principal will be taking a picture with the cat and lasers... and a dog!

The school district recently reached a compromise with Rodriguez... Instead of the original cat-and-laser photo going in the book, a picture of Rodriguez, his cat, [principal Diane] Wilkinson and her dog will be featured on the principal’s yearbook page, district spokeswoman Karen Corona said.

“We reached a compromise that everybody’s happy about,” she said...The new photo will be taken by the same photographer, Vincent Giordano of Trinactia Photography. The lasers, like Mr. Bigglesworth, will also stay.

“We wanted to make sure that Draven knows that we appreciate his creativity and energy around this, and we wanted to do something out of the ordinary with it,” Corona said.

We hope that photographer Vince Giordano takes some photos of just Mr. Bigglesworth and the dog, because those would be pretty cute!

Anyway, Draven wrote on his petition page (over 7,000 signatures in support) about a T-shirt that's now for sale, "The proceeds will be going to a cheap car for myself, as well as college and my photographer, Vince. Feel free to get one!" 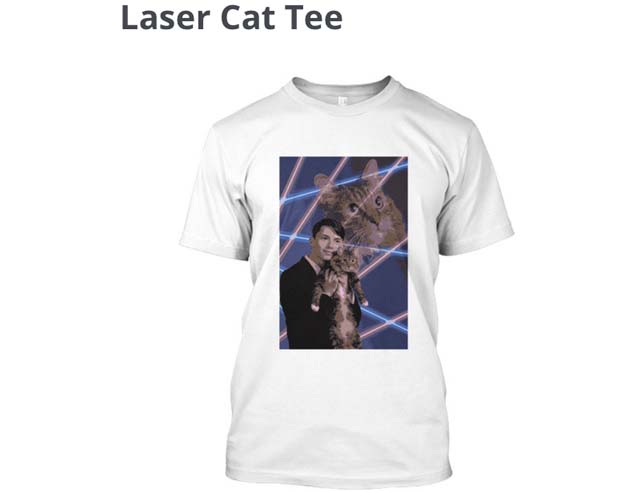 It'll be perfect to wear while watching this:

#Draven Rodriguez
#Mr Bigglesworth
#Schenectady
#yearbook photo
Do you know the scoop? Comment below or Send us a Tip