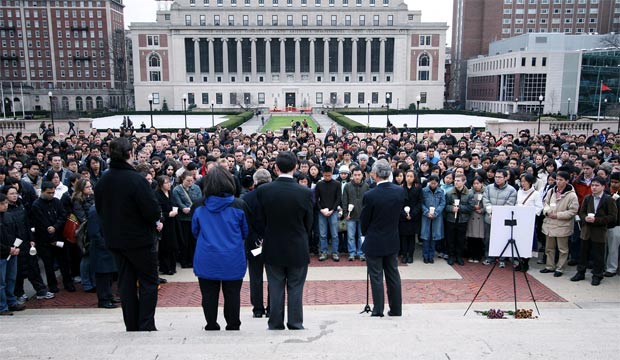 The 14-year-old boy whose actions led to the death of a Columbia graduate student was arraigned in Family Court yesterday. An NYPD detective told the judge that Sheldon (whose last name is withheld due to his age) admitted to repeatedly punching 24-year-old Minghui Yu in the head "a couple times." But, according to Detective John Garvey, the boy also claimed "he attempted to grab Mr. Yu to keep him from going into traffic."

Last Friday, Yu had been walking home and when he stood at the Broadway median between West 122nd and 123rd Streets, where Sheldon, accompanied by two friends, assaulted him. After a struggle, Yu ran into the street and was fatally struck by a vehicle. Surveillance footage showed the suspect in the area.

Judge Jane Pearl still found there was enough to charge the boy with second-degree manslaughter; he will remain in a juvenile detention center until the next hearing on April 24. The NY Times reported Pearl told Sheldon, "whose eyes were red and swollen," "I want you to know that I will be thinking about you and wanting you to take care of yourself." The boy's mother and other relatives cried.

Yu's parents, who live in China, are expected to arrive in New York today. Columbia administrators and Senator Chuck Schumer worked with Chinese officials to expedite their visas, and school administrators and Yu's friends at the Columbia University Chinese Students and Scholars Association have been working together to plan a memorial. A memorial service is tentatively scheduled for April 17, but the CUCSSA's Junhua Shen said, "Right now everything is all preliminary because the parents have the final say."

#columbia university
#crime
#manslaughter
#Minghui Yu
Do you know the scoop? Comment below or Send us a Tip