Teen Driver Allegedly Asked, "How is the Mercedes?" 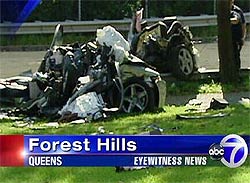 Jacob Chubalashvili was arraigned yesterday on charges including second-degree manslaughter for crashing into an Acura, killing its two passengers immediately in Forest Hills on Tuesday morning. The Queens DA's office released some of the 17-year-old unlicensed driver's statements:

[On the morning of August 5] Chubalashvili said, “I just took the car, I didn’t have permission to take it. I smoked some marijuana before I took the car... I remember taking the car, it’s a Mercedes and jetting down the road and the next thing I remember is waking up in the hospital.”

That evening, after being told by detectives what the criminal charges were, Chubalashvili allegedly said, “I was speeding and popping pills. I had about 12 pain pills. I was really f----- up.”

In a second statement that night, after being told by police that two people were dead, Chubalashvili allegedly said, “How is the Mercedes? That was supposed to be my car.”

Queens DA Richard Brown said, “The defendant, who is 17 years old, is accused of taking the lives of two innocent people by his reckless actions. The victims in this case are believed to have been on their way to work when the defendant struck their car at such a high rate of speed that it split in half. This case will be vigorously prosecuted and should serve as a warning to those who would flout our traffic regulations and put others in danger.”

Chubalashvili faces up to 15 years if convicted; he is being held on $500,000 bail. His lawyer claims he made those statements while heavily medicated and blamed the intersection's "overgrown trees."