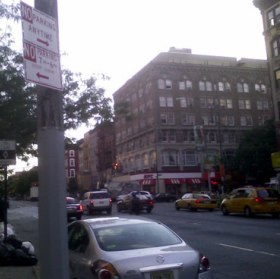 Mayor Bloomberg's announcement that he would reduce the number of parking permits for civil servants by 20% has annoyed yet another group. Joining police officers, fire fighters, and other emergency workers are teachers.

However, Streetsblog takes exception to Weingarten's letter, finding problems with her claims. Here's one:

2. [From Weingarten's letter:] "Teachers do not clog areas such as lower Manhattan" with their personal vehicles.

[From Streetsblog:] Not only are teachers' cars part of the Lower Manhattan traffic jam, in a city where 43 percent of elementary school kids are unhealthily obese, teachers and education officials have been known to clog school playgrounds with their personal vehicles. In one notorious case, Public Advocate Betsy Gotbaum intervened to stop city employees from using the Tompkins Square Middle School's playground as a parking lot in 2004.

Streetsblog (which also points to a study suggesting free parking makes people more willing to drive, even when there are mass transit options nearby) says that it's not about eliminating teachers' permits, it's about creating "more centralized and rational system for distributing parking permits based on real need" - with enforcement.