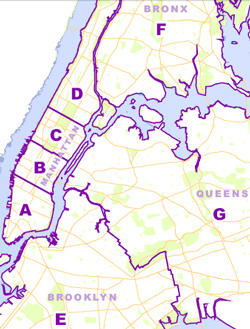 Many taxi drivers are prepared to go on strike again tomorrow to protest the mandatory installation of expensive GPS equipment, credit and debit card readers, and video screens in the rear seats of their cabs. The effect of the first strike seemed negligible to many New Yorkers.

A very informal survey of cab drivers who already have the equipment installed in their cars yielded a consensus opinion of the new technology: it sucks. Drivers complained that when the card reader is not functioning, the entire meter is inoperable. Also, the unit gets very hot, but drivers are hesitant to turn them off because they take so long to reboot. Passengers don't seem that enthusiastic about the seat back video either, and many became frustrated with the card swipe devices, according to the Daily News.

Group ride travel to/from Manhattan and JFK will be a $30 flat fare per person, while group ride travel to/from Manhattan and LGA would be $20 per person. Zone charges would dictate fares for trips to/from airports and boroughs other than Manhattan. The City also reserves the right to allow livery hails if the TLC determines that it is necessary after evaluating the situation. Subsequent public announcements about plans will be made by the TLC.

Trips To/From JFK or LGA from boroughs other than Manhattan

* Tolls are included in all zone-based and flat fare rides.
* Charges apply to adult riders only. Children under 12 ride free with adults

The zone-based fare structure citywide charges $10 per person within a given zone, and an additional $5 per person for each zone subsequently entered or passed through. Below are the zones: