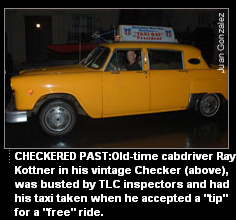 The New York Post has a story today on the seizure of an old checkered cab from its owner, who uses it to give free rides to people around the city. 80-year-old Ray Kottner had his hack seized when Taxi and Limousine Commission investigators spotted him accepting a $10 gratuity from a grateful rider. Kottner's been driving a cab for 64 years but decided to quit "working for the man" a few years ago. A CBS News profile of him in 2006 described his unique business model. He offers people free rides in his old checker cab. In addition to the ride, he offers an irascible personality and doesn't suffer fools gladly. People love it, and the money he makes in tips from grateful riders far outstrips anything he made as a cab for hire.

Representatives for medallioned drivers and medallion owners, as well as the TLC, feel that Ray Kottner is a crook, stealing money from legitimate cab drivers. Because officially he is not a cab for hire, he is exempt from purchasing a medallion that costs hundreds of thousands of dollars, paying for the required insurance that licensed cabs must have, and passing the regular inspections that ensure that his vehicle is safe. The Post quotes David Pollack, the editor of Taxi Insider, "This guy is nothing but a crook, and we're all glad he's finally off the streets."

The passenger who gave Kottner $10 told TLC investigators that he asked for it. Kottner accuses the agency of being no better than carjackers for taking his checker cab. Taxi Ray had to post a $1,500 bond to get his car out of impound and pay a $185 fee for the cost of having an officer drive it there. He also faces an additional $400 in fines.