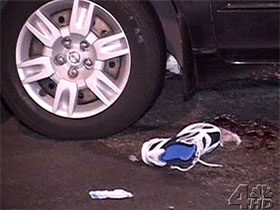 A taxi driver was fatally run over by another driver at Madison and East 65th Street shortly after midnight. Police believe that the taxi got into an accident with a black Nissan Altima, and then two drivers got into an argument. After the taxi driver got out of the cab, the Nissan's driver hit him.

The Nissan's driver and passenger, a man and a woman, fled the scene, and witnesses say the taxi driver was pinned under the Nissan. One said the taxi driver "was completely under the car. He didn't move at all." A hydraulic lift was needed to lift the Nissan and remove the taxi driver, who was pronounced dead at New York Presbyterian.

The police are looking for the pair, who were seen running west towards Central Park. The car was not reported stolen, which means the police will probably be able to figure out who was driving it, but they are still seeking any information from the public. Call Crimestoppers 800-577-TIPS.