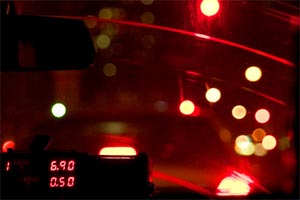 After announcing an undercover program to crackdown on bad cabbie behavior a few weeks ago, the Taxi and Limousine Commission says it already sees improvement.

According to the Post, the TLC says there was 222 complains about drivers refusing credit card payments in December, which dropped to 150 in January - and there were just 63 complaints in the first 13 days of February. TLC deputy commissioner of uniformed services Pansy Mullings said, "Rejections have gone way, way down." Additionally, reports of rude drivers has dropped 11% between October and January. Well, drivers hearing that some of their fares might be undercover TLC employees and NYPD officers probably helped prompt cooperation.

Photograph of a taxi fare by flat_luxe on Flickr