Tax Return Time: Paterson Not So Giving, Cuomo is Rich 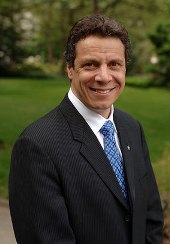 Congratulations, State Attorney General Andrew Cuomo: You seem to be the "wealthiest statewide elected official," according to the NY Times and your tax returns. While Cuomo makes $151,000 as AG, his total reported income was $545,000, thanks to investments.

State Senate Majority Leader Joseph Bruno didn't pass judgment on Paterson's seemingly paltry charitable donation, "People have to make judgments as to what they do and whether or not to publicize what they do." Of course, Bruno and State Assembly Leader Sheldon Silver have, per Capitol Confidential, "have historically chosen not to make their returns public." Bruno and Silver work for, respectively a law firm and a consultancy and make additional income that way.

More fun facts: Cuomo made $1.5 million during the previous year, when he worked at a private law firm. And former governor Eliot Spitzer's 2006 reported income was almost $2 million, made up of his salary as attorney general, investments, and $1.4 million in rental income from his dad's real estate empire.

#Albany
#andrew cuomo
#governor paterson
#politics
#tax return
#thomas dinapoli
Do you know the scoop? Comment below or Send us a Tip