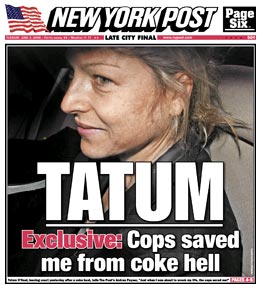 Following her Sunday night arrest, Tatum O'Neal held her head high yesterday upon her release from the 7th Precinct, where she spent the night. The actress was busted buying crack and cocaine on Clinton Street, not far from her apartment in The Forward building, around 7:30 p.m. Not even a full 24-hours later she quickly came clean to The NY Post, thanked the cops for saving her, and is even trying to help the guy who sold her the drugs, Alan Garcia.

She told the paper that her recent struggle towards recovery was nearly ruined by Sunday's walk, but "the cops came and saved me!" As for what set her off, she explained:

"I lost my Scottish terrier, Lena," three weeks ago. "That seemed to set me off. She got old. She got cancer. She was the fabric of our family. We had to let her go to heaven. My daughter and I had to put her down. It was too horrible for words. I couldn't get out of it. I was going to my psychiatrist. I was doing everything I could do. I have the disease of alcoholism. It's lifelong. I treat it every day by going to my 12-step program."

Yesterday The Post detailed how the drug deal went down, and reportedly she was found with "two yellow plastic bags of cocaine in her front pants pockets." While there was no further mention of crack, the paper did explain to her that she was also busted for that drug ("It's both?" she asked, surprised. "I didn't even know what I was buying!"). As for her night behind bars, O'Neal describes how she made the best of it:

"I slept on a mattress with a couple of ladies because I was tired," she giggled. "And they were nice! And I thought the thing that was cool about New York, no special treatment. No special cell."

retraces O'Neal's steps to rock bottom, and while everyone seems to be rooting for the actress -- her publisher is using her brush with the dark side as a selling point for O'Neal's 2005 memoir.

#7th precinct
#arrest
#cocaine
#crack
#drugs
#Lower East Side
#Tatum O'Neal
Do you know the scoop? Comment below or Send us a Tip