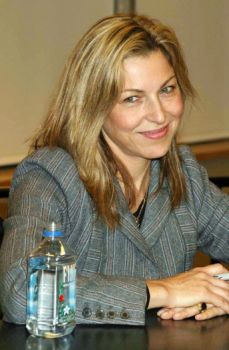 With just one night of rest after her stay behind bars at the 7th Precinct, Tatum O'Neal returned to her Alcoholics Anonymous meeting yesterday morning. She had previously told The NY Post "I have the disease of alcoholism. It's lifelong. I treat it every day by going to my 12-step program."

She continues to thank the police who busted her for buying cocaine, crediting them for saving her, and declared that "I'm still going to get my year on July 10th!" The NY Post noted that on her way to AA she looked "refreshed, rested" and was revealing "multiple tattoos, including a massive inking of her children's names on her right arm" (photos). She told the waiting press outside of her apartment building about her destination for the day, and told them what she did Sunday night was "regrettable."

A passenger in the police van who rode to the Precinct with O'Neal on Sunday told The Daily News, "She was saying it was for a part in a movie, like 'Sex and the City' or s--t like that." The 21-year-old was being taken in for marijuana possession. As for O'Neal, she seems set on trying to help the homeless man who sold her the drugs, 33-year-old Alan Garcia; she told the News, "He's not a drug dealer. He's a panhandler who sold drugs."

#aa
#Alcoholics Anonymous
#arrest
#drugs
#Tatum O'Neal
Do you know the scoop? Comment below or Send us a Tip
A new Gothamist is coming! We’ve moved comments over to our beta site. Click here to join the conversation and get a preview of our new website.