Tasers May Cause Drop in Fatalities, Pants 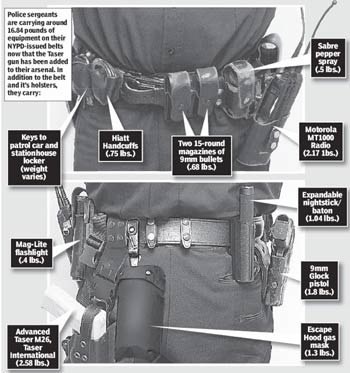 Following the release of the Rand Corp. report commissioned by the NYPD, much attention has been given to Tasers, the ballistic electrode-firing weapons meant as a less violent alternative than gunfire when dealing with life-threatening situations.

Immediately, there are concerns the police will use Tasers as compliance tools. Just this past week, a Brooklyn man died after being shot with a Taser by a Long Island cop while trying to swallow a bag of cocaine.

While Police Commissioner Ray Kelly is considering widespread adoption of Tasers by the NYPD--ordering 20% of sergeants on patrol to begin carrying them on their hips instead of secured in a vehicle--he is being cautious. The NY Times points out Kelly was the deputy inspector in charge of cleaning up a police scandal during the early 1980s that involved cops using a stun gun to coerce a confession from a drug suspect.

On a more practical level, some of the sergeants ordered to strap on their Tasers are wondering ..."Where?" A police officer's belt already weighs more than 15 pounds and a Taser will bring the total weight to 16.8 pounds. As the Post graphic (pictured) illustrates, police sergeants already have to carry a pistol, spare ammunition, a flashlight, pepper spray, an expandable baton, a gas mask, handcuffs, a radio, and station house keys. Batman's utility belt was hardly as unwieldy. At almost 17 pounds, sergeants may want to add suspenders to their uniforms along with those Tasers.

#introduction
#non-lethal
#nypd
#Ray Kelly
#sergeants
#tasers
Do you know the scoop? Comment below or Send us a Tip