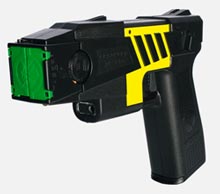 The family of the disturbed man who fell to his death after being Tasered by police will likely sue the city, surprising no one. Famous civil rights lawyer Ron Kuby is now representing relatives of Iman Morales, whose funeral service was held yesterday in Greenwich Village. Kuby tells the Daily News, "The first thing the family is focused on is burying their son. But the city has already acknowledged what any idiot on Earth could see - that they [the cops] acted irresponsibly and wrongfully and caused a man's death."

Morales had a bipolar disorder and was experiencing a bad reaction to a medication change on September 24th when he climbed onto a store security gate outside his Bed Stuy building, stripped naked, and began waving a long fluorescent lightbulb around. A shocking video showed him falling ten feet and landing on his head after being Tasered. As a result, the NYPD's Emergency Service Unit was retrained Monday on Taser protocol. And the lieutenant who ordered the Taser firing told a reporter outside his Long Island home that he is "truly sorry for what happened."

Morales's mother Olga Negron spoke at yesterday's wake, telling the mourners, "Just because he was sick and on bad medication doesn't give them the right to zap him...I asked them to let me go to my son. They said, 'We're taking care of it. We're taking care of it.' " William Morales, his father, said, "He was a really good person. He was a real comedian. Everybody loved him." And according to the Daily News, Morales's 21-year-old brother condemned the NYPD: "Police were below him. They could have caught him. They let him fall to his death. And I've lost a brother."